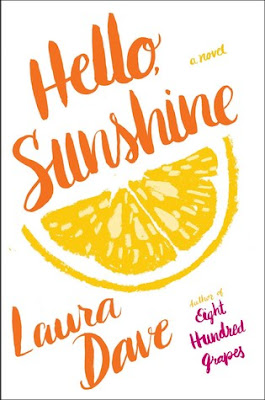 Summary: From Laura Dave—the author of the “addictive” (Us Weekly), “winning” (Publishers Weekly) and critically acclaimed bestseller Eight Hundred Grapes—comes a new novel about the secrets we keep…even from ourselves.

Sunshine Mackenzie has it all…until her secrets come to light.

Sunshine Mackenzie is living the dream—she’s a culinary star with millions of fans, a line of #1 bestselling cookbooks, and a devoted husband happy to support her every endeavor.

And then she gets hacked.

When Sunshine’s secrets are revealed, her fall from grace is catastrophic. She loses the husband, her show, the fans, and her apartment. She’s forced to return to the childhood home—and the estranged sister—she’s tried hard to forget. But what Sunshine does amid the ashes of her own destruction may well save her life.

In a world where celebrity is a careful construct, Hello, Sunshine is a compelling, funny, and evocative novel about what it means to live an authentic life in an inauthentic age.

Michele's thoughts: Oh, what a tangled web we weave… And Sunshine Mackenzie’s web has just disintegrated all around her. She’s been hacked, and this hacker is spilling all her secrets and lies. Sunshine’s a culinary star with an enormously successful line of cookbooks and a deal in the works with the Food Network. But this career has been built on top of a mountain of deceit. Deceit that includes her real name, where she’s truly from, and the fact that she can’t actually cook… unless you count the incredible grilled cheese sandwich she can make (a recipe which I’m totally going to try, by the way). And she also did one big no-no. Really big. Once. Sounds like this main character would be pretty unlikable – she herself admits she’s not a good person. Wrong. Sunshine, aka Sunny, is incredibly likable; and unless you’ve never ever told a single lie (and if you say you haven’t, you’re a liar), she’s also pretty relatable. Sunny got caught up in something bigger than her and lost herself along the way. Watching Sunny’s world come tumbling down around her is like watching a train wreck. Or maybe more like a sinking boat, because all the people in her life are jumping ship until there’s no one left. Sunny chucks her phone into the Hudson River, and I think a lot of people would have been tempted to follow it down. But not her. She goes back to the place she came from, where she really came from, the place she never wanted to return to and was more than willing to lie about being from – and to the people she left behind in that place. And this, my friends, is where Sunny’s story really begins. It isn’t going to be easy, but Sunshine is going to make a comeback and this time she’s going to do it right. I had to admire that kind of tenacity. But what I really admired was her remorse and the resolve to not repeat her past mistakes.

This story is incredibly relevant in today’s culture and the way lives are lived on social media for all to see. I love the message in this story. It’s about lies, yes, but also about this ridiculous need our society has to prove they are living their very best life and the deception sometimes used in order to do it. I’m not the biggest fan of or presence on social media; and when Mckenzie was old enough to tread those waters, it came with some big warnings, a couple of those being don’t share anything personal EVER, and don’t believe what you read or see – take everything with a grain of salt. And reading this book with her led us to one of my favorite discussions that we’ve had regarding the Internet and honesty. I’m going to let her talk more about that in her review, but I love that this book had us talking long after we finished Sunny’s story.

Sunny isn’t the only character to love and root for in this book, either. There are so many fabulous characters – Rain, Ethan, Chef Z (hilarious!), and Sammy (who was such a little scene stealer!) – to be adored here. There are also a few characters to loathe and one character in particular that I can’t help but be completely on the fence about: the hacker. But I don’t want to say anything else; these things are best discovered on their own. Hello, Sunshine reminds us of what really matters in life – and my favorite reminder: to not care what other people think. Authenticity is everything, whether you feel you have everything or not.

This was our first Laura Dave book, but we’ve already one-clicked Eight Hundred Grapes and can’t wait to read more of her beautiful writing. The way she wrote Sunny was absolutely brilliant, and the lessons and significance of what this character learns warmed my heart. A fantastic moral and an ending that some may consider open-ended, but not only was it realistic… I felt it was actually pretty perfect. I’m a fan; and I want everyone to read this delightful, sometimes heartbreaking, sometimes hilarious, but always captivating book. You don’t want to miss it.

Mckenzie's thoughts: Hello, Sunshine is an interesting and very realistic look into what it's like when a celebrity's seemingly perfect life falls apart at the seams. Despite her many mistakes, Sunshine was a lovable character and one that I found it impossible to be unhappy with. There are so many important messages in this book, but one in particular is that people make mistakes. A lot of them. We're human beings; it's kind of what we do. And sometimes it's easy to stand back and say, "How did this person get themselves in so deep? How did they let it go this far?" But the truth is that it can be so much easier than it seems from the outside, because even the smallest of lies can pile up to create an enormous mess. I really did feel for Sunshine; a lot of her mistakes were guided by others who were trying to "help" her career, and she unfortunately went along with them, thinking it would be the best for said career and for her celebrity status. This is where another very important message comes in. Popularity, or the attempt to find it, can be blinding. Blinding to what is right and wrong; blinding to what is only a little fib to make yourself look a tad better and what is flat-out lying to and deceiving millions of people. It happens so much more easily and more naturally than we sometimes realize. Because the thing is – nearly everybody does it. To some extent, at least. Whether it's lying about your entire life to paint a pretty picture for your audience or filtering a photo on Instagram or tweaking a story, almost everyone makes adjustments and edits to the truth to make it more appealing, more attractive, more relatable, etc. And Hello, Sunshine brings this to light in a heartbreaking but eye-opening way. Along the path of her career, Sunshine got lost in her attempts to be perfect, to keep up with this beautiful false life she had created; and through her downfall, she sees that she isn't the only one. But she also sees firsthand what it's like for someone to be the complete opposite. To not care about popularity, appearance, perfection. For the first time in a long time, actually, Sunshine's life is anything but perfect. But despite the devastating way she got there, that was exactly what she needed. I really appreciated how much Sunshine grew within the pages of this book and how very real this story felt. I loved the ending and the way every aspect of this book came together to form a moral that is incredibly pertinent to society today: that there is nothing wrong with imperfection. Because in all honesty, perfection is an illusion; and the effort put forth to achieve it these days is increasing bit by bit. This book is such an important book for the place we are at in the world right now, where social media appearance is the top priority. I enjoyed the approach Hello, Sunshine took to this subject; this isn't a book that shames us for enjoying social media but one that implores the reader to think about its importance in our lives. It's an incredibly poignant, thought-provoking read with stunning, captivating writing and relevant themes, and I am very thankful to have read it.

Thank you to Simon & Schuster for providing us with a copy of this book in exchange for our honest reviews.