Review: Until It Fades by K.A. Tucker 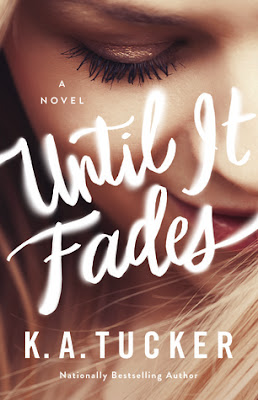 Summary: Twenty-four-year-old truck stop waitress and single mother Catherine Wright has simple goals: to give her five-year-old daughter a happy life and to never again be the talk of the town in Balsam, Pennsylvania: population two thousand outside of tourist season.

And then one foggy night, on a lonely road back from another failed attempt at a relationship, Catherine saves a man’s life. It isn’t until after the police have arrived that Catherine realizes exactly who it is she has saved: Brett Madden, hockey icon and media darling.

Catherine has already had her fifteen minutes of fame and the last thing she wants is to have her past dragged back into the spotlight, only this time on a national stage. So she hides her identity. It works.

“Life is too short to do what other people think you should do.”

K.A. Tucker has written a book in a genre I didn’t think I was in the mood for, but she delivered a story that turned out to be exactly what I needed. Until It Fades is so beautiful, incredibly sweet, and a perfect modern-day fairy tale.

Catherine Wright and her adorable and precocious daughter Brenna may not have much in the way of material things, but they have each other and that’s everything. Living in a small town, Cath is still trying to live down the events that transpired when she was seventeen years old. Events that the residents of Balsam (population 3,000), Pennsylvania won’t let her forget. On her way home one night, she comes upon a wreck and saves an unconscious man’s life by pulling him from a burning car. She wants to remain anonymous; but the man whose life she saved is none other than Brett Madden, the famous and beloved hockey star of the Philadelphia Flyers. Brett isn’t about to let the good Samaritan evade him without a proper thank-you, but the last thing Cath wants is to be in the public eye and have the rumor mill stirred up yet again and her difficult past broadcasted for all to see. But when Brett and Cath finally do come face to face, neither are prepared for the spark that ignites.

This is such an enjoyable and satisfying story with characters that are easy to fall for and root for. Though it was an unexpected change of pace from the thrillers I’ve been reading, it was one I found so rewarding and I fell head over heels in love with it. From Cath and Brenna to Brett and his family, Lou and Leroy, best friend Keith, and Cath’s brother Jack, this book is packed full with a lovable cast.

Ms. Tucker subtly reminds us that victims deserve compassion and not blame, that our past should not define us, and moving on and taking chances are a part of living. This delightful stand-alone moved me to both laughter and tears and warmed my heart long after I turned the last page. This is a book for readers who believe in happily-ever-afters, who know that without mistakes there are no lessons, and who realize that we all deserve a second chance.

Posted by A Belle’s Tales at 2:47 AM
Email ThisBlogThis!Share to TwitterShare to FacebookShare to Pinterest
Labels: ARCs, Book Reviews, Contemporary Romance, K.A. Tucker