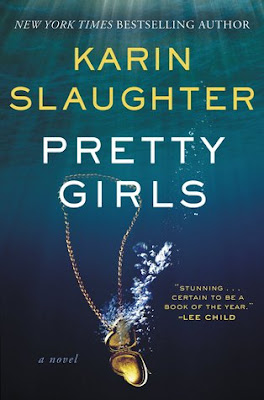 More than twenty years ago, Claire and Lydia's teenaged sister Julia vanished without a trace. The two women have not spoken since, and now their lives could not be more different. Claire is the glamorous trophy wife of an Atlanta millionaire. Lydia, a single mother, dates an ex-con and struggles to make ends meet. But neither has recovered from the horror and heartbreak of their shared loss—a devastating wound that's cruelly ripped open when Claire's husband is killed.

The disappearance of a teenage girl and the murder of a middle-aged man, almost a quarter-century apart: what could connect them? Forming a wary truce, the surviving sisters look to the past to find the truth, unearthing the secrets that destroyed their family all those years ago . . . and uncovering the possibility of redemption, and revenge, where they least expect it.

Powerful, poignant, and utterly gripping, packed with indelible characters and unforgettable twists, Pretty Girls is a masterful thriller from one of the finest suspense writers working today.

Pretty Girls is a book that I featured on an On My Shelf post, and readers' comments led me to bump this to the top of my reading list; and I am so glad I did. It’s been a while since a book kept me up until sunrise, but this one did it. It is equal parts enthralling and horrifying.

It’s been over twenty years since nineteen-year-old Julia disappeared. What happened to her has never been discovered. The impact it had on her family has never been reconciled. And the secrets and lies that are about to be exposed will change both of those things, for better or for worse. Cleverly told through Claire’s POV, Lydia’s POV, and letters from a father to a missing daughter, these stories that at first appear to have nothing to do with one another soon intersect in the most fascinating way.

One of my favorite parts of a thriller is the distrust factor; and in Pretty Girls, one main character realizes she can’t trust anyone. Absolutely anyone. Not the people who protect others for a living, not her so-called friends, and certainly not her own judgment. Not after the secrets she’s uncovered. It’s this doubt that has her confiding in an unexpected ally.

I realize I’m not divulging much about the story itself, and I don’t want to sound like a broken record in my reviews; but the best part of a mystery is the mystery. The things that take place in this novel must be discovered by the reader. This was an electrifying and exciting story that truly kept me on edge. I absolutely could not stop reading until I knew the outcome of this story, and I’m happy to say it was worth missing a night’s sleep. It was an outstanding conclusion. This book is a terrific thriller; but I warn you, it is graphic at times and it is a chilling storyline. But wow, can Karin Slaughter tell a story. I loved her writing, and she has landed herself on my must-read author’s list. If you’re a thriller lover, this is one book you don’t want to miss.

Posted by A Belle’s Tales at 2:07 AM
Email ThisBlogThis!Share to TwitterShare to FacebookShare to Pinterest
Labels: Book Reviews, Karin Slaughter, mystery thriller, suspense