Review: The Fall of Lisa Bellow by Susan Perabo 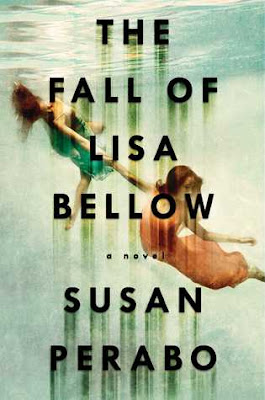 Summary: The breakout novel from the critically acclaimed author of the short story collections Who I Was Supposed to Be and Why They Run the Way They Do—when a middle school girl is abducted in broad daylight, a fellow student and witness to the crime copes with the tragedy in an unforgettable way.

What happens to the girl left behind?

A masked man with a gun enters a sandwich shop in broad daylight, and Meredith Oliver suddenly finds herself ordered to the filthy floor, where she cowers face to face with her nemesis, Lisa Bellow, the most popular girl in her eighth grade class. The minutes tick inexorably by, and Meredith lurches between comforting the sobbing Lisa and imagining her own impending death. Then the man orders Lisa Bellow to stand and come with him, leaving Meredith the girl left behind.

After Lisa’s abduction, Meredith spends most days in her room. As the community stages vigils and searches, Claire, Meredith’s mother, is torn between relief that her daughter is alive, and helplessness over her inability to protect or even comfort her child. Her daughter is here, but not.

Like Everything I Never Told You and Room, The Fall of Lisa Bellow is edgy and original, a hair-raising exploration of the ripple effects of an unthinkable crime. It is a dark, beautifully rendered, and gripping novel about coping, about coming-of-age, and about forgiveness. It is also a beautiful illustration of how one family, broken by tragedy, finds healing.

This book is not at all what I anticipated based on the title and my scan of the summary. Thirteen-year-old Meredith Oliver promised herself a root beer right after school to raise her spirits following an Algebra II test that didn’t go as well as she had wanted. She almost doesn’t enter the little sandwich shop when she sees popular girl Lisa Bellow already at the counter. Just as she’s about to forgo her treat, Lisa looks up and their eyes meet. The only thing worse than skipping the store because of Lisa would be Lisa knowing she was skipping the store because of her. So Meredith takes a deep breath and pushes the door open. Never once suspecting that her entire world was about to change. Because a few minutes later, as Lisa is giving a sandwich order to the guy behind the counter, another man enters the store. He wears a mask and he’s holding a gun. He makes both girls lie on the floor while he robs the store. It’s the first time Meredith has been this close to Lisa since grade school. A time before popularity divided her fellow classmates and there was an imagined need for social structure. As they lie there on the floor, staring into one another’s eyes, one pair flooded with tears and the other wide and frozen with shock, the man tells Lisa to get up, and she does. And then she is gone.

Though the title is The Fall of Lisa Bellow, the story is not Lisa’s. It belongs to Meredith and her mother Claire. Though it was unexpected, I found it to be a very interesting direction to take the story in. It’s common to read about an abduction from the point of view of the girl who was taken, but it’s rare to read about the girl who wasn’t. This is not only about Meredith’s trauma but the aftermath and how it affects her whole family dynamic. It’s also an intriguing look into the relationship between mothers and daughters. The story alternates between Meredith’s POV, the unpopular girl who suddenly finds herself popular, and her mother Claire’s, who knows she should feel guilty about being happy it wasn’t her daughter that was abducted, while struggling to know what to do for Meredith. It was a captivating look into the family they were before and they family they are after. The mother and daughter relationship was one that neither I nor my own daughter could relate to because we have a much different relationship than the characters in the book. Truthfully, I’m not sure I liked either character very much, but it did not keep me from being fascinated by them. I believe my favorite character was Evan, Meredith’s brother who has been living through his own tragedy over the past year.

And what about the girl who was taken? I wanted to know what happened to Lisa. There were rumors it was staged and she ran off with an older guy, rumors she was being stalked. There were people who hoped she was still alive and people who believed she was already dead. But the readers don’t know because no one else in the book does, either. It made me adjust my entire train of thought, but I think following the path the book does not only breaks the mold in a story like this, but it’s a brave course to take.

I enjoyed the author’s writing; and even though I felt the pace was slow at times, she held my attention from beginning to end. I will definitely read more of her work in the future. The Fall of Lisa Bellow is a compelling story of a mother and daughter, the tragedy that threatens to tear them apart, and the path to their healing.


Thank you to Simon & Schuster for providing me with a copy of this book in exchange for my honest review.