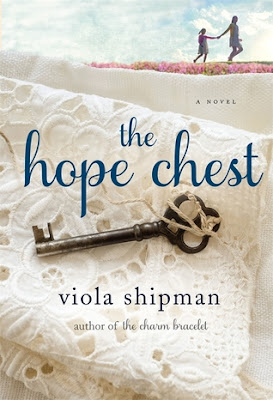 Summary: From the beloved author of Indie Next Pick The Charm Bracelet, a story about an heirloom hope chest and the connection it inspires among three people in need of hope.

The discovery of one woman’s heirloom hope chest unveils precious memories and helps three people who have each lost a part of themselves find joy once again.

Ever since she was diagnosed with ALS, fiercely independent Mattie doesn’t feel like herself. She can’t navigate her beloved home, she can’t go for a boat ride, and she can barely even feed herself. Her devoted husband, Don, doesn’t want to imagine life without his wife of nearly fifty years, but Mattie isn’t likely to make it past their anniversary.

But when Rose, Mattie’s new caretaker, and her young daughter, Jeri, enter the couple’s life, happiness and the possibility for new memories return. Together they form a family, and Mattie is finally able to pass on her memories from the hope chest she received from her mother.

With each item—including a favorite doll, family dishes, an embroidered apron, and an antique Christmas ornament—the hope chest connects Mattie, Don and Rose to each other and helps them find hope again in the face of overwhelming life challenges.

A beautiful story about the unconditional love and support of family, The Hope Chest will remind you that hope can be found where and when you least expect it.

Don and Mattie have been married for almost 50 years; but as Mattie battles debilitating ALS, Don fears they won’t see their 50th anniversary. A couple so incredibly in love they’ve shared an amazing life together with their only regret being that they were never able to have children. Their love is a testament to never take a single day for granted.

Single mom Rose is still grieving her mother’s death, still reeling from her divorce, and struggling hard to pay bills and hold onto the house her family loved so much. Her little girl Jeri is the one bright spot in her life. Rose is about to start her new job as a caretaker, a job that could help keep a roof over her and Jeri’s heads; but Rose is about to find something much better than just a new job.

A couple who couldn’t have a family meet a mother and daughter that are missing theirs. These four people come together and find more love and hope than one heirloom hope chest can contain.

The Hope Chest is a beautiful and sentimental story. Though not the type of book I normally read, when I began reading this story, I couldn’t help but think how much my mother would enjoy this. Mattie and Don’s relationship reminds me so much of my own parents’ relationship. To still be that in love and to have your best friend by your side after so many years is certainly something that most of us wish for. Each chapter represents a keepsake from Mattie’s hope chest, keepsakes she thought she’d never be able to pass down to a daughter or granddaughter. Until now. As each item is pulled from the hope chest, a story is told from Mattie’s childhood, as well as stories from Mattie and Don’s early years. The glimpses into the past are extremely sweet and poignant. While the story itself is a heartbreaking one, it is also a hopeful one. There’s a wonderful reminder in this book about how much we should cherish our older generation. There is so much that we can learn from them and so much that they still have to give. The book does touch on faith near the end, something that I found lovely but not something that would be off-putting to those who don’t share it. The Hope Chest also proves that you don’t have to share someone’s DNA to be their family.

I’ve never read Viola Shipman’s work before, and I was surprised to find out that Viola Shipman is a penname for Wade Rouse. He chose his grandmother’s name to honor the woman who inspires him and his writing. That warmed my heart, and his love for his grandmother and her life stories shines through his words.

Though this is not my usual genre, I continued to think about how much my mother will love this book. And as I neared the end, a funny thing happened… I realized that I loved it, too.


“There is always hope where there is love.”


Thank you to the publisher for providing me with a copy of this book in exchange for my honest review.