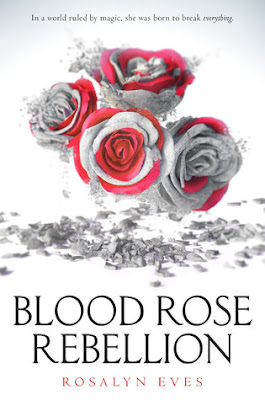 Summary: Sixteen-year-old Anna Arden is barred from society by a defect of blood. Though her family is part of the Luminate, powerful users of magic, she is Barren, unable to perform the simplest spells. Anna would do anything to belong. But her fate takes another course when, after inadvertently breaking her sister’s debutante spell—an important chance for a highborn young woman to show her prowess with magic—Anna finds herself exiled to her family’s once powerful but now crumbling native Hungary.

In Hungary, Anna discovers that nothing is quite as it seems. Not the people around her, from her aloof cousin Noémi to the fierce and handsome Romani Gábor. Not the society she’s known all her life, for discontent with the Luminate is sweeping the land. And not her lack of magic. Isolated from the only world she cares about, Anna still can’t seem to stop herself from breaking spells.

As rebellion spreads across the region, Anna’s unique ability becomes the catalyst everyone is seeking. In the company of nobles, revolutionaries, and Romanies, Anna must choose: deny her unique power and cling to the life she’s always wanted, or embrace her ability and change that world forever.

Born into a powerful class of magicians called the Luminate, Anna Arden has been surrounded by magic her whole life. But she’s only been just that – surrounded by it. Anna was deemed Barren by the Luminate government known as the Circle when she was a child, never to practice magic or cast spells as the rest of her family. When Anna unintentionally breaks her sister’s spells at Catherine’s debut before the Circle, she begins to draw unwanted attention from its members. They make plans to study her, to take her to a more private location where they can learn more about what causes her to break spells; but Anna’s family decides that the only way to protect Anna (and their reputations) is to send her with her grandmother to Hungary, where they will stay with her grandmother’s cousin in their home country until the Circle loses interest in studying her ability. Though Anna is at first less than thrilled about her arrangement, she too knows it is for the best and may very well be the only way to protect herself and her loved ones; the last thing any of them needs right now is to appear as a threat to the Binding, the powerful spell put in place by the Circle that serves as a reservoir of magic, available only to those born into the Luminate. Those outside the upper class of magicians are forbidden from using it – though there have been murmurs of rebellion; and try as the Circle and Anna’s family might to ignore them, they are steadily growing louder, and Anna may soon find herself at the center of them all.

A few of my reading friends struggled with some aspects of this book, but I completely adored it. From the first page, I could feel that it was something new and special; the plot moved at a perfect pace for everything that needed to be revealed and explained, and the beautiful but not overly descriptive writing held me utterly captivated until the last page. I fell fast and hard for these characters. Anna is a likable, passionate main character who, when we met, did not yet realize her own strength; she had much to learn both about herself and the world outside her comfy Luminate life. I loved her from the start for her spirit and determination, and my heart broke for her because of how her family treated her; but she still had a long way to go as far as breaking the pretentious molds her mother had raised her in. I was so proud of Anna; she showed astonishing character growth and proved to so many – including herself – that a young, wealthy, sheltered girl from England could indeed make a difference.

There were also several supporting characters that easily won my heart – Anna’s cousins, Noémi and Mátyás; her papa, grandmother, and brother, perhaps the only immediate family that were truly good to her; Ginny; Lady Berri; Karolina; Izidóra; and of course, Gábor. I love the way their relationship developed and grew into something beautiful. Gábor is such a strong, genuinely good character; it’s possible I may have fallen for him faster than Anna did. Let me assure you, though, that there was no insta-love; they definitely had their differences to overcome before they became… better acquainted. Overall, this story provides the reader with a vivid, unique world full of characters to love (and to hate). The world-building and imagery in this book were beautiful, and I felt as though I were truly living in it alongside my new companions. One aspect of this world I particularly loved was the way the author tied in the magic with real history; my favorite was the mention of the colonies and how they used magic freely due to the Circle’s inability to implement the Binding overseas. This story is crafted so brilliantly and creatively; this is such an impressive debut.

Another thing I loved about Blood Rose Rebellion was the uncertainty: Anna’s, Gábor’s, even my own. I couldn’t stop flipping back and forth on what I believed – one second I was sure that what was asked of Anna was a terrible idea and that Gábor was right to oppose it; the next, I was convinced Anna knew what she was doing and that this was the only real solution. I love it when a story can make you second-guess even yourself and make it so difficult to decide what you would do in that situation. This book was a roller-coaster; but goodness, was it ever worth it.

The story ended beautifully, with no cliffhanger or major unanswered questions; so I was surprised and thrilled to find that this is the first book in a trilogy! I can’t wait to return to Rosalyn Eves’s beautiful writing and to these wonderful characters that have found such a special place in my heart.