Early Review: I See You by Clare Mackintosh 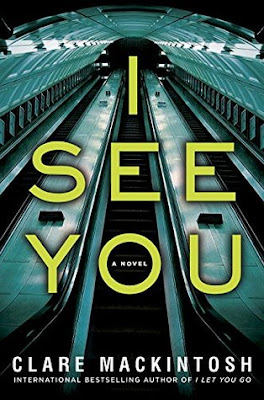 Summary: Every morning and evening, Zoe Walker takes the same route to the train station, waits at a certain place on the platform, finds her favorite spot in the car, never suspecting that someone is watching her...

It all starts with a classified ad. During her commute home one night, while glancing through her local paper, Zoe sees her own face staring back at her; a grainy photo along with a phone number and a listing for a website called FindTheOne.com.

Other women begin appearing in the same ad, a different one every day, and Zoe realizes they’ve become the victims of increasingly violent crimes—including murder. With the help of a determined cop, she uncovers the ad’s twisted purpose...A discovery that turns her paranoia into full-blown panic. Zoe is sure that someone close to her has set her up as the next target.

And now that man on the train—the one smiling at Zoe from across the car—could be more than just a friendly stranger. He could be someone who has deliberately chosen her and is ready to make his next move…

“Routine is comforting to you. It’s familiar, reassuring. Routine makes you feel safe.
Routine will kill you.”

Last year, I devoured and loved Clare Mackintosh’s I Let You Go. I was thrilled to start I See You; and though it was not the emotional read that I Let You Go was, it was just as thrilling and perhaps even more nail-biting, and I enjoyed every page.

This story is told through two distinctive and central POVs, one being from Zoe Walker, a woman who sees her own face in an ad and comes to the unsettling realization that she, along with countless other women, is being stalked – and the other voice belonging to PC Kelly Swift, who is determined to find the predator and stop them, even as she battles her own inner demons. But my favorite and the most unsettling is the addition of an unknown POV huddled in wait between the chapters that instills fear and provides insight into just how dangerous a situation these women are in.

I See You is a staggering reminder of the negative consequences that living a life on social media brings. The fallout of having an undeviating routine and the misfortune that can ensue when you become so absorbed in your day-to-day, concentrating solely on what comes next, that you fail to realize that someone out there is watching. Someone who knows exactly what you’ll do next. I believe it’s the realism in this story that makes it so frightening. It’s one of those stories that you know has happened, still happens, and could happen to you.

This is a smart thriller that is electrifying and entirely relevant. At times, the pacing was a bit slower as the story built, but I didn’t find it bothersome in the least as I was too absorbed in pointing fingers and attempting to narrow down my own list of suspects. I felt like I was eavesdropping on someone else’s life and even invading the main character’s privacy, but there was no way I was looking away for a second. This is my second book by Clare Mackintosh, and she’s proved that she’s a must-read author for this mystery lover.


“How many of you are being followed? Would you even know?”

A huge thank-you to Berkley for sending a copy of this book in exchange for my honest review. Quotes above are taken from an ARC and are subject to change in the final copy.

Posted by A Belle’s Tales at 1:53 AM
Email ThisBlogThis!Share to TwitterShare to FacebookShare to Pinterest
Labels: ARCs, Book Reviews, Clare Mackintosh, mystery thriller