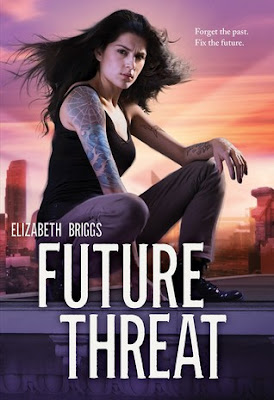 Summary: Six months ago Aether Corporation sent Elena, Adam, and three other recruits on a trip to the future where they brought back secret information--but not everyone made it back to the present alive. Now Elena's dealing with her survivor's guilt and trying to make her relationship with Adam work. All she knows for sure is that she's done with time travel and Aether Corporation.

But Aether's not done with her--or Adam, or fellow survivor Chris. The travelers on Aether's latest mission to the future have gone missing, and Elena and her friends are drafted into the rescue effort. They arrive in a future that's amazingly advanced, thanks to Aether Corporation's reverse-engineered technology. The mission has deadly consequences, though, and they return to the future to try to alter the course of events.

But the future is different yet again. Now every trip through time reveals new complications, and more lives lost--or never born. Elena and Adam must risk everything--including their relationship--to save their friends.

You know when you get to spend time with a friend that you haven't seen in a while? And you wonder what things will be like since the last time you saw them? But you know that no matter what's changed in either of your lives, you're unbelievably excited to be reunited with them because you still care so much about them? Yeah. That's pretty much what it was like to open up Future Threat and see Elena's name on the first page.

Still reeling from the events of Future Shock, in which they lost two of their original team members and nearly their own lives, Elena and Adam are trying to adjust to a somewhat normal life. But Elena can't ignore the feeling that someone (namely Aether) is keeping tabs on her, and the black car that's been following them around for the last six months doesn't exactly help those feelings. Not to mention she's been suffering from severe PTSD ever since what happened during their last encounter with Aether. Factor in that, despite Adam being the perfect boyfriend, she can't seem to stop pushing him and anyone else away; and Elena truly feels like even after Aether is supposedly out of their lives, hers is still falling apart. And she feels as though she's to blame.

The action and intensity in Future Threat completely lived up to, if not surpassed, that of Future Shock, which is no easy feat for a sequel to such an incredible book. It seemed like our group of teenagers truly couldn't win in this one; and that no matter what they did, they were destined to lose someone. I don't want to give away too much about this book, since it's a sequel; but I will say that I was incredibly happy with the way certain things turned out, although there are of course other heart-breaking things I wish could have been avoided.

All in all, Future Threat was a fantastic sequel; and diving back into this world with Elena, Adam, and Chris was exactly like catching up with that old friend and knowing that, no matter how different things are, they're still the same wonderful person you fell in love with the first time around. Also still the same were the vivid writing, stunning detail, and elaborate world-building. This series has become one of my favorites, as has this author. I can't wait to dive back in with Future Lost in 2018 and see where Elizabeth Briggs takes me and this amazing group of characters next.

A huge thank-you to the publisher for sending a copy of this book in exchange for my honest review.