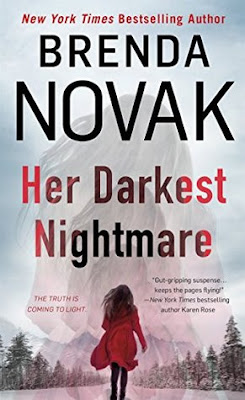 THE HUNT FOR A SERIAL KILLER
Evelyn Talbot knows that a psychopath can look perfectly normal. She was only sixteen when her own boyfriend Jasper imprisoned and tortured her—and left her for dead. Now an eminent psychiatrist who specializes in the criminal mind, Evelyn is the force behind Hanover House, a maximum-security facility located in a small Alaskan town. Her job puts her at odds with Sergeant Amarok, who is convinced that Hanover is a threat to his community…even as his attraction to beautiful Evelyn threatens to tear his world apart.

BEGINS WITH AN ESCAPE FROM HER PAST
Then, just as the bitter Alaskan winter cuts both town and prison off from the outside world, the mutilated body of a local woman turns up. For Amarok, this is the final proof he needs: Hanover has to go. Evelyn, though, has reason to fear that the crime is a personal message to her—the first sign that the killer who haunts her dreams has found her again...and that the life she has so carefully rebuilt will never be the same…

Dr. Evelyn Talbot is a successful and respected psychiatrist who focuses on serial killers and their psyche and behaviorism. Evelyn’s new project, Hanover House, is a maximum security prison built in the small town of Hilltop, Alaska. Along with her specially selected team of psychiatrists and hand-picked prison staff, she will delve into the minds of these killers, studying them in the hopes of finding out what makes them do what they do and preventing future victims, something Evelyn herself almost became when she was only sixteen years old. Jasper, her first love – her first everything – killed her three best friends and then tortured her for three days before leaving her for dead. This is the force that drives Evelyn to stop men like Jasper. Unlike the men in Hanover House, Jasper was never caught. And to this day, he haunts her.

As excited as Evelyn is for her work at Hanover House, the community of Hilltop is horrified that these prisoners are now living in their backyard. And no one is more upset than Sergeant Amarok, who is sworn to protect the people of this town. But as much as Amarok would like to see Hanover House gone, he doesn’t want to see Evelyn leave. There is something going on between these two, much to their annoyance.

This is only my second book by Brenda Novak, but I enjoyed this story and meeting Evelyn Talbot. I had not read very far in the book when I felt like I was missing some details that I thought I needed. I discovered the novella Hanover House, a short story about Evelyn’s second abduction at the hands of Jasper, which answered some of the questions I had. It is not necessary to read the novella before starting this book, but I have one of those brains that won’t rest until I have all the details and I absolutely cannot read anything out of order. So I’m glad that I paused Her Darkest Nightmare and read it, especially with the insight into Evelyn and Amarok’s unique but uneasy relationship.

I enjoyed the plot, though at times it felt a bit far-fetched but still kept me invested to the end. The characters are likable, and even those who are intentionally unlikable are fascinating. My favorite aspect was the inclusion of quotes from actual serial killers at the beginning of each chapter. It was absolutely chilling, perfectly setting the tone for this novel. Though I have read more graphic thrillers and even though this story contains a romance, it is still a dark and intense read. I know for a fact I will be reading the second installment of this new series. I recommend this book for fans of suspense and readers of Brenda Novak.

Posted by A Belle’s Tales at 12:00 AM
Email ThisBlogThis!Share to TwitterShare to FacebookShare to Pinterest
Labels: ARCs, Book Reviews, suspense