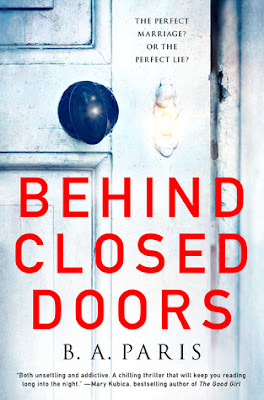 Summary: Everyone knows a couple like Jack and Grace: he has looks and wealth, she has charm and elegance. You'd like to get to know Grace better. But it's difficult, because you realize Jack and Grace are never apart. Some might call this true love.

Picture this: a dinner party at their perfect home, the conversation and wine flowing. They appear to be in their element while entertaining. And Grace's friends are eager to reciprocate with lunch the following week. Grace wants to go, but knows she never will. Her friends call—so why doesn't Grace ever answer the phone? And how can she cook such elaborate meals but remain so slim?

And why are there bars on one of the bedroom windows?

Nobody is perfect. You never know what goes on behind closed doors. These are two sayings we hear all our lives but that have never been proven truer than within the pages of this book.

For all appearances, Jack and Grace are the perfect couple with the perfect marriage. This is the perfect lie. When Grace met Jack, he seemed too good to be true. He was. Page after page reveals just how far from good Jack is. This was a book the subject matter of which was difficult to read at times, but nothing could tear me away until I knew how it ended. I have to say, the antagonist did not terrify me in the way I thought he might; it was the situation he placed the main character in that did. I had my moments of “Why don’t you just…” and “Can’t you try…” and “Just do this…” – but then she would, and then she’d try, and then she did. And it was all in vain. I think there’s a different kind of fight to put up when you have nothing to lose and when you have someone you’re fighting for. Because of Grace’s love for her little sister, her options were very limited. And speaking of her little sister, Millie was quite the scene-stealer and easily my favorite character. The clock is counting down and Grace knows she only has one chance left before her nightmare becomes someone else’s.

Behind Closed Doors was a fast read and an intriguing debut from B.A. Paris. Though it is being touted as the next *insert 2012’s best-selling thriller that shall not be named here* – as is every psychological thriller that has since followed it – this is not that book. It doesn’t need any comparison; it does just fine on its own.  Creepy, thrilling, and will definitely have you side-eyeing your significant other!

Posted by A Belle’s Tales at 3:02 AM
Email ThisBlogThis!Share to TwitterShare to FacebookShare to Pinterest
Labels: ARCs, Book Reviews, psychological thriller