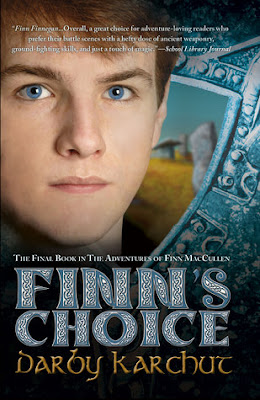 Summary: Just when Finn MacCullen thought fate couldn’t kick him any harder after the events of the Festival of the Hunt, it does. Now, he must overcome a series of nearly impossible trials to prove his worth as an apprentice, or lose his place at his master Gideon’s side.

But Finn and Gideon, and their friends, are determined to boot fate right back. They’re going to do whatever it takes to succeed, including teaming up with a sorceress and a certain teen angel.

However, Finn’s life has as many twists as a Celtic knot, and master and apprentice find themselves in their ancestral homeland of Ireland with only their wits—and a fair bit of the Black Hand’s charm—to protect them from the vengeful Celtic goddess known as the Scáthach.

In this heart-stopping finale of the award-winning series, it’s going to take every scrap of Finn’s Irish luck and pluck to save himself, and his master, from death. Or worse.

It's hard to believe this series has come to an end. I started the first book, Finn Finnegan, three years ago; but it feels like I've been a part of this world for much longer. And in some ways, it feels like it was only yesterday I first met Finn and Gideon. Finn's Choice was such an amazing conclusion; and without spoiling anything, I'll just say that I was incredibly happy with the way things were wrapped up – and with a particular scene at the end.

The characters. I cannot put into words what these characters have come to mean to me. Finn and Gideon are two of my absolute favorites, and saying goodbye to them was difficult; but I was really happy with the way things worked out. I really loved getting more of Griffin and Basil in this one, too. I loved their cameos in the last book, and I'm so excited to start the Griffin series to get to know them even better.

The writing and world-building in these books are absolutely beautiful. It makes my heart ache a little to think I won't be revisiting Colorado or Ireland with these characters anymore; they were written with so much detail that it felt like I was truly standing there with them within the pages. I know it won't be long, though, before I pick up book one and begin this adventure again. These may be middle-grade books, but there is something in the Adventures of Finnegan MacCullen series for all ages. There's humor and heartbreak and plenty of adventure. I for one know that this is a series I'll be re-reading for many years to come and that someday my own kids will love it as much as I do. I'm so grateful to Darby Karchut for giving me such an amazing world to love and be a part of. I may be leaving this series for now, but it's definitely not leaving me. <3

A huge thank-you to the author for providing me with a copy of this book in exchange for my honest review.