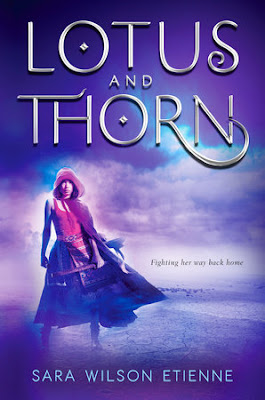 Summary: Ravaged by a plague known as Red Death, the planet Gabriel, a former colony of Earth, is a barren wasteland. Since being abandoned by Earth 500 years ago, resources are scarce and life is cheap. To stay alive, the survivors, the Citizens, scavenge the remains of a now dead city, trading for food with the resource-rich Curadores, the only other survivors on Gabriel. Every old computer, every piece of wire, every scrap of metal counts. To steal is the ultimate sin. So when tough-as-nails seventeen-year-old Leica is caught doing just that, she's exiled and left to the mercy of Gabriel's unforgiving desert for the rest of her life.

While in exile, Leica discovers a mysterious shuttle, which may not only lead her home, but even more impossible—reestablish contact with Earth. Then Red Death rears its head again, killing her entire work crew, leaving Leica all alone until a handsome Curador offers her refuge in the Dome—the only place on Gabriel untouched by Red Death, where a decadent and sultry life awaits. But there's a catch: Leica can only enter the Dome as his concubine—his Kisaeng. When a rogue group of Citizens see their chance for revolution in Leica's good fortune, she finds herself unraveling a deadly mystery with chilling answers to the true origin of Red Death and the reason Earth really abandoned them so long ago.

A richly imagined fantasy in the vein of Tamora Pierce, Lotus and Thorn, is a magnificent, epic adventure.

A friend came to visit me once and brought a plate brimming with cookies she had made. When she told me what was in them, I thought there was no way I was going to like them. Cranberries? No. White chocolate chips? Hate. Macadamia nuts? Gross. Yeah, yeah, I can be a picky eater; but I am southern so it’s in my DNA to be polite, and I tried them. You know what? Those crazy cookies were good. And more importantly, I could NOT stop eating them. Welcome to my experience with Lotus and Thorn. First of all, this book feels much more science fiction (not normally my thing) than fantasy. As the synopsis states, main character Leica must pose as a Kisaeng in order to gain entry to the dome. Don’t like that. A male character does things that make me want to climb into the book and do bodily harm to his most treasured appendage. Not a fan. But just like those crazy cookies I couldn’t stop eating… I could NOT stop reading this book.

This book is a very fast-paced sci-fi that delves into the lives of a trio of sisters living on the planet Gabriel and watching those they love succumb to a terrible and fatal virus, the Red Death. Living with Sarika, whose religious beliefs are equivalent to fanaticism, Leica will do anything to make sure her sisters are safe. But when a plan goes terribly wrong, she finds herself exiled and at the mercy of a Curador. In order to save her people, she must go undercover as his Kisaeng, putting her own life at risk to ensure the lives of those she cares about.

There’s a lot to learn about this new world the author has created, and at times that required some patience for this reader; but once I got into the rhythm of the writing and the world building, I liked it. This is an edgier YA, and it does contain elements that initially pushed my buttons; but I like that certain things in the story transpired that I primarily didn’t agree with only to have the character and storyline redeem themselves. Good may be bad, bad may be good, and someone you thought weak? May be the strongest person of all. This was a very unique read for me, but I couldn’t put it down and I can’t stop thinking about it. I think that says something. There is no cliffhanger, which I love; and while I’m not entirely sure if there will be more, this book makes a great stand-alone.