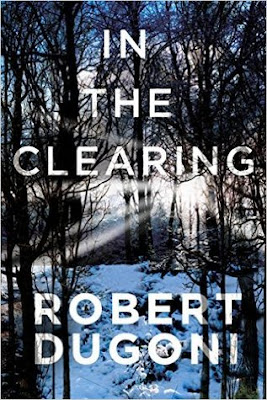 Summary:
Detective Tracy Crosswhite has a skill, and a soft spot, for tackling unsolved crimes. Having lost her own sister to murder at a young age, Tracy has dedicated her career to bringing justice and closure to the families and friends of victims of crime.

So when Jenny, a former police academy classmate and protégé, asks Tracy to help solve a cold case that involves the suspicious suicide of a Native American high school girl forty years earlier, Tracy agrees. Following up on evidence Jenny’s detective father collected when he was the investigating deputy, Tracy probes one small town’s memory and finds dark, well-concealed secrets hidden within the community’s fabric. Can Tracy uphold the promise she’s made to the dead girl’s family and deliver the truth of what happened to their daughter? Or will she become the next victim?

The Tracy Crosswhite series has become one of my favorite crime thrillers; and in In the Clearing, Robert Dugoni didn’t just deliver one thrilling mystery but gave two fascinating cases to investigate with the detectives I’ve come to look forward to spending time with.

Tracy’s former police academy classmate Jenny asks her to look into a 40-year-old cold case involving a beautiful Native American teenager, Kimi Kanasket, who supposedly jumped off a bridge into the White Salmon River following a breakup with her boyfriend.  But Kimi’s family didn’t buy it.  Kimi had too much going for her and was looking forward to college and a life away from the small county of Klickitat.  Jenny’s recently deceased father kept a case file hidden in his desk that Jenny found after his funeral.  He was the investigating deputy; and from the evidence he collected, it was clear he didn’t believe Kimi took her own life that night, either.  Tracy vows to fulfill the promise to Kimi’s family that the detective never could and, with the advances made in DNA testing and forensic analysis, begins to uncover one secret after another buried deep within this small, close-knit community.  Secrets that certain town members don’t want Tracy digging into – secrets that they will go to great lengths to protect.

Meanwhile, a domestic homicide proves to have one too many confessions and a cover-up of epic proportions that has the detectives back home working non-stop to crack this bewildering case.

I can’t stress the genius of the author for cleverly balancing both of these intriguing storylines.  As usual, his writing held me captive from beginning to end.  Like being reunited with an old friend, I enjoyed every moment spent catching up with Tracy and the rest of the amazing cast that Mr. Dugoni has me invested in.  This book can be read as a stand-alone, but I highly recommend starting with book one, My Sister’s Grave, and getting to know Tracy and her co-workers.  There’s a lot of history there, and it only enhances the following books in my opinion.

An astonishing ending with full closure but so absorbing that it left me wanting more!  I can hardly wait for the next book in this brilliant series.

Posted by A Belle’s Tales at 12:28 AM
Email ThisBlogThis!Share to TwitterShare to FacebookShare to Pinterest
Labels: ARCs, Book Reviews, Robert Dugoni, The Tracy Crosswhite Series