Early Review: The Girl from Summer Hill by Jude Deveraux 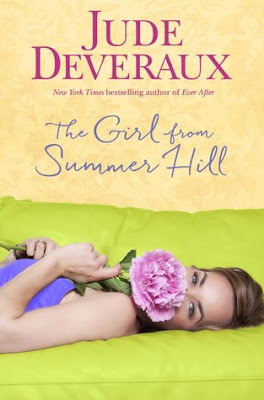 Summary: Sparks fly as fiery Casey Reddick and brooding Hollywood actor Tate Landers clash in the Virginia summer heat. A chef who puts her career first and her love life second, Casey doesn’t see what every girl in town is swooning over. She made up her mind the moment she met Tate—he’s gorgeous, but stuck-up, nothing like his ex-brother-in-law, Devlin who’s playing the Wickham to Tate’s Darcy in local production of Pride & Prejudice. Casey makes the perfect Elizabeth Bennett—how could she be star-struck when she’s heard Devlin’s damning stories about Tate? As they rehearse together, however, Casey finds herself attracted to Tate—he’s much more down-to-earth than she expected and any physical contact between the two of them literally gives her a tingling, electric shock. As opening night draws near, Casey has some difficult decisions to make. Whom should she believe? The seemingly sincere, slighted Devlin or Tate, whose rough, arrogant exterior may only be skin deep. She’s come to love that jolt she gets when they touch—but will she get burned?

Head chef Casey Reddick is looking forward to her summer in the small town of Summer Hill, Virginia, and staying in what she believes to be Christopher “Kit” Montgomery’s guest house at Tattwell.  She’s going to do all the cooking for cast and crew as Kit puts on a local production of Pride and Prejudice.  In the middle of the night from her kitchen window, she sees a man strip down and begin to use the outdoor shower on the porch of the little house.  She must be dreaming.  She’s not dreaming. She should call the cops.  She should not make a cup of tea.  She should not then sit down and sip her tea as the glorious muscled man soaps up his perfect golden body.  She should stop staring.  Why can’t she stop staring?  The ring of her cellphone breaks her trance.

When actor Tate Landers, the actual owner of Tattwell, hears a cell phone ringing from his guesthouse just as he finishes his shower, he freezes.  The damn paparazzi again.  Can’t a guy get a few days off without them lurking around every corner?  Will they never grant him any peace?? And how did they ever find him here? He just arrived in town. This is private property and Tate is fed up.  He puts his fist through the screened door, unfastens the hook, and confronts… the curvy redhead who stands wide-eyed in– are those cow-jumping-over-the-moon pajamas??

And that, my reading friends, is just the first few pages. After a failed attempt at apology, it’s dislike at first sight and a misunderstanding of ginormous proportions that rival the size of Tate’s… biceps ;)

Casey can’t wait for the actor to go back to wherever actors go.  She’ll just stay out of his way, and he’d better stay out of hers.  Easy peasy.  Then Kit manages to talk both Tate Landers and his actor friend Jack Worth into sticking around Summer Hill to star in his play, with the proceeds going to charity.  When they agree to play Mr. Darcy and Mr. Bingley respectively, the town goes wild and the females vie for the roles of Elizabeth and Jane.  But when Kit demands Casey play Elizabeth because she’s the only female for miles who doesn’t fawn over the handsome actor and the only one who can actually pull of Elizabeth’s irritation with Darcy, she soon has her hands full with the actor she thought she despised.  Turns out that first impression was way off the mark.  Can these two overcome Tate’s pride and Casey’s prejudice?

Instead of chapters we have acts and scenes, and fans of Ms. Deveraux will love the cast of characters old and new alike – not to mention all the nods to Pride and Prejudice both onstage and off.  Heroes and heroines, villains and villainesses, foes to friends and friends to lovers – this story kept me entertained page after page. The Girl from Summer Hill is a fun, flirty, perfect summer read.

Posted by A Belle’s Tales at 2:58 AM
Email ThisBlogThis!Share to TwitterShare to FacebookShare to Pinterest
Labels: ARCs, Book Reviews, Jude Deveraux, Romance