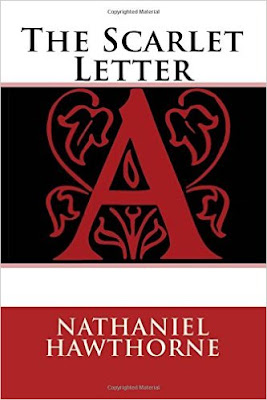 Summary: Set in the harsh Puritan community of seventeenth-century Boston, this tale of an adulterous entanglement that results in an illegitimate birth reveals Nathaniel Hawthorne's concerns with the tension between the public and the private selves. Publicly disgraced and ostracized, Hester Prynne draws on her inner strength and certainty of spirit to emerge as the first true heroine of American fiction. Arthur Dimmesdale stands as a classic study of a self divided; trapped by the rules of society, he suppresses his passion and disavows his lover, Hester, and their daughter, Pearl.

After I read this for school, I turned in an honest but very school-friendly report. But then Mom told me I could share my feelings freely here on the blog. And so begin the gifs and snark.

I love Nathaniel Hawthorne. Adore him. I think he was an amazing writer, and today's literature wouldn't be the same without him. That being said, I did not love The Scarlet Letter. I loved (most of) the characters, I enjoyed the undertone of criticism of the Puritan lifestyle (another reason I adore Nathaniel Hawthorne), and the story itself was great. I think one of my main problems was getting through the detail; it took forever to get to the next plot point.

The entirety of Chapter 5 was basically a big explanation of how Hester felt. I did not need to know in that much detail how that woman felt. That could've been summed up in about three sentences. Hester did a thing. Hester feels very bad about thing. People no like Hester. I personally just think Nate should've stuck to his short stories.

Another thing. Ignominy. I looked it up. It means shame. If I were old enough to play a drinking game and could take a shot every time I read that word, I would have alcohol poisoning. Not to mention I have to try to sound out how to say it in my head every few lines because it is literally everywhere and clearly is not in my everyday vocabulary. It means shame, Nathaniel. Just say shame.

My above saltiness aside, I did enjoy the actual story. I really felt for Hester and what she went through – the Puritan lifestyle of publicly confessing all your sins and being just as publicly punished for them??

And Nathaniel Hawthorne's subtle mocking of that lifestyle makes me respect him immensely. Talk about a guy ahead of his time. I know that at the time he wrote this, things had gotten slightly better; but it goes without saying that things have improved even more over the years in terms of acceptance and judgement. It’s sad, though, that even now there’s still a long way to go.

I also want to give Dimmesdale an honorable mention. I, like a lot of people, do take issue with the fact that he wasn't punished like Hester was. It's incredibly unfair to place all the blame on Hester when it takes two to tango. However, the way he suffered both mentally and emotionally was heartbreaking; he clearly wasn't a bad guy, and he wanted to help Hester out of the mess they'd both made. Despite the fact that he was a coward and made some questionable decisions, I still liked him and wished certain things could've gone differently for him.

All in all, I really liked this story, and I love Nathaniel Hawthorne and his writing; but I don't think I'll re-read this one ever in the too distant future. However, if you haven't already read them, I highly recommend his short stories (like "The Great Carbuncle," which I absolutely loved) :-)

Posted by A Belle’s Tales at 2:10 AM
Email ThisBlogThis!Share to TwitterShare to FacebookShare to Pinterest
Labels: classics, Katertot reviews, Mckenzie Kate reviews