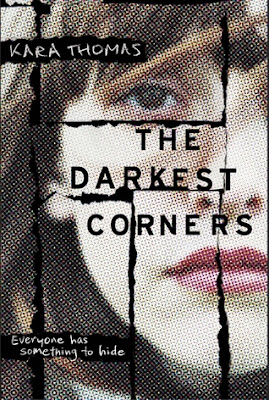 Summary: The Darkest Corners is a psychological thriller about the lies little girls tell, and the deadly truths those lies become.

There are ghosts around every corner in Fayette, Pennsylvania. Tessa left when she was nine and has been trying ever since not to think about it after what happened there that last summer. Memories of things so dark will burn themselves into your mind if you let them.

Callie never left. She moved to another house, so she doesn’t have to walk those same halls, but then Callie always was the stronger one. She can handle staring into the faces of her demons—and if she parties hard enough, maybe one day they’ll disappear for good.

Tessa and Callie have never talked about what they saw that night. After the trial, Callie drifted and Tessa moved, and childhood friends just have a way of losing touch.

But ever since she left, Tessa has had questions. Things have never quite added up. And now she has to go back to Fayette—to Wyatt Stokes, sitting on death row; to Lori Cawley, Callie’s dead cousin; and to the one other person who may be hiding the truth.

Only the closer Tessa gets to the truth, the closer she gets to a killer—and this time, it won’t be so easy to run away.

Mckenzie: Tessa and Callie were inseparable growing up in Fayette, Pennsylvania. But at nine years old, their lives and friendship changed drastically when their testimony put a man in prison. But did they really see what they said they saw?

Now, 9 years and a move to Florida later, Tessa is back in that same small town of Fayette once again to see her father before he dies. That’s all. Simple trip there, simple trip back. But what Tessa encounters is more than she ever bargained for, and the visit to her quiet ramshackle little hometown proves to be anything but simple.

This book was, in a word, incredible. There are so many amazing twists and secrets to be revealed that I can’t go into the story too deeply; but when I say you’ll have to read it and see for yourself, I mean it – this one is a must-read. From the oddly fascinating setting of rural Fayette to the fact that nearly every character seems to have their share of secrets, The Darkest Corners is utterly captivating; I was hooked from the first chapter. Tessa is such an interesting main character; and though she doesn’t think very highly of herself, I certainly do. She’s smart and determined and strong, and she has quickly become one of my favorite heroines. I really liked the supporting characters, too – namely Maggie, Decker, and Callie; the latter surprised me, considering some of her actions in the earlier parts of the book, but after some much-needed character growth, she changed my mind.

The Darkest Corners is hands-down one of my favorite reads so far this year, and I really enjoyed buddy-reading it with my mom. The plot is enthralling but not too fast-paced, and the writing is beautiful; I definitely plan on going on the adventure that is this brilliant story again sometime soon.

Michele: The Darkest Corners is a fantastic young adult psychological thriller that we both really enjoyed.  A slow-paced build introduces the reader to intriguing and well fleshed-out characters; and as the story accelerates, it is filled with red herrings and many turns along the way.  This makes for a great buddy-read, providing lots of fun discussions, theories, and speculations.  This book is dark and twisty for a YA book, engrossing its target audience but also resulting in a great read for those of us who have been adults for more than a few years ;)  I loved the ending and must admit I did not see that last page coming.  Kara Thomas is an author that we both look forward to reading again.

A huge thank you to Delacorte Press for sending us this book in exchange for our honest review.