Early Review: Everyone Brave Is Forgiven by Chris Cleave 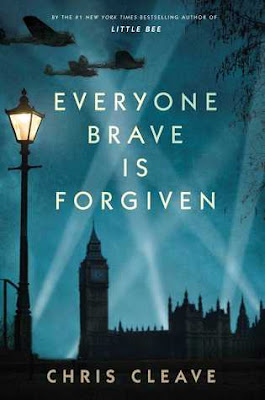 Summary: From the author of the #1 New York Times bestselling Little Bee, a spellbinding novel about three unforgettable individuals thrown together by war, love, and their search for belonging in the ever-changing landscape of WWII London.

It’s 1939 and Mary, a young socialite, is determined to shock her blueblood political family by volunteering for the war effort. She is assigned as a teacher to children who were evacuated from London and have been rejected by the countryside because they are infirm, mentally disabled, or—like Mary’s favorite student, Zachary—have colored skin.

Tom, an education administrator, is distraught when his best friend, Alistair, enlists. Alistair, an art restorer, has always seemed far removed from the violent life to which he has now condemned himself. But Tom finds distraction in Mary, first as her employer and then as their relationship quickly develops in the emotionally charged times. When Mary meets Alistair, the three are drawn into a tragic love triangle and—while war escalates and bombs begin falling around them—further into a new world unlike any they’ve ever known.

A sweeping epic with the kind of unforgettable characters, cultural insights, and indelible scenes that made Little Bee so incredible, Chris Cleave’s latest novel explores the disenfranchised, the bereaved, the elite, the embattled. Everyone Brave Is Forgiven is a heartbreakingly beautiful story of love, loss, and incredible courage.

When war is officially declared, Mary North signs up a mere 45 minutes later, much to the dismay of her socially upstanding and affluent family.  Eighteen years old, feisty, and bright, Mary’s visions of becoming a spy or liaison are shattered when she is instead appointed schoolmistress to a primary class.  But when the school is evacuated to the countryside and Mary is relieved of her position, she realizes just how much she enjoyed teaching.  Tom Shaw can hardly believe that his friend and flatmate Alistair Heath has joined the war.  Alistair is an art restorer, not a soldier.  Though saddened to see his friend leave, Tom becomes quite smitten with teacher Mary North and arranges for her to teach the children that weren’t evacuated... the children no one else wanted.

Mary and Hilda, Tom and Alistair, and especially sweet Zachary are absolutely enchanting. Friendship, romance, and a forbidden attraction bloom in the darkest times. The characters are so clever, and their exchanges are at times humorous and at others heart-wrenching.  Their letters are among my favorite moments of the story.  I came to care deeply for each one as their lives intertwined during the many horrors of World War II.  Taking place between 1939 and 1942 with both London and Malta as backdrops, Everyone Brave Is Forgiven captivated me, frightened me, and ultimately made me fall in love.

With writing that is both brilliant and engaging, the author paints a story that is heartbreaking, yes, but also eye-opening.  War is a very difficult thing to read about, but I’m so glad I read this.  It’s remarkable when a book you read has the power to change you.  This story puts things in great perspective and is one I will not forget.  The author draws from the inspiration of his own grandparents, and he shows us that bravery is not just for those who are fighting a war. My first book by Chris Cleave but certainly not my last.

Posted by A Belle’s Tales at 12:08 AM
Email ThisBlogThis!Share to TwitterShare to FacebookShare to Pinterest
Labels: ARCs, Book Reviews, Emotional Reads, historical fiction