Release Day Review: He Will Be My Ruin by K.A. Tucker 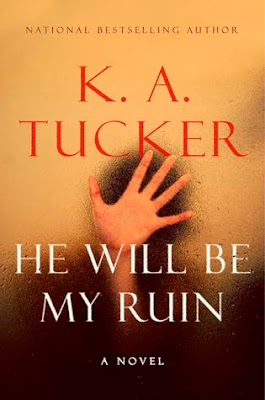 On the surface, Celine Gonzalez had everything a twenty-eight-year-old woman could want: a one-bedroom apartment on Manhattan’s Lower East Side, a job that (mostly) paid the bills, and an acceptance letter to the prestigious Hollingsworth Institute of Art, where she would finally live out her dream of becoming an antiques appraiser for a major auction house. All she had worked so hard to achieve was finally within her reach. So why would she kill herself?

A man who was supposed to be her salvation . . .

Maggie Sparkes arrives in New York City to pack up what’s left of her best friend’s belongings after a suicide that has left everyone stunned. The police have deemed the evidence conclusive: Celine got into bed, downed a lethal cocktail of pills and vodka, and never woke up. But when Maggie discovers a scandalous photograph in a lock box hidden in Celine’s apartment, she begins asking questions. Questions about the man Celine fell in love with. The man she never told anyone about, not even Maggie. The man Celine believed would change her life.

Until he became her ruin.

On the hunt for evidence that will force the police to reopen the case, Maggie uncovers more than she bargained for about Celine’s private life—and inadvertently puts herself on the radar of a killer. A killer who will stop at nothing to keep his crimes undiscovered.

“This man was once my salvation.  Now he will be my ruin.”

K.A. Tucker continues to impress me, and I absolutely devoured He Will Be My Ruin.  This book was somewhat of a departure from her Ten Tiny Breaths and Burying Water series, both of which I adore.  This new novel is a superb mystery thriller which I could not help but read in one sitting.  Devoted friend Maggie Sparkes is a likeable and tenacious main character who, along with a remarkable assembly of characters, begins to unravel the secrets surrounding best friend Celine Gonzalez’s suicide.  The story and characters drew me in and kept me utterly absorbed.  This book was made for me with Celine’s antiques, appraisals, and extraordinary finds, which are somewhat of a passion of mine as well.  I loved the maturity of the characters, the intricate plot, and the perfect pacing, all of which flow brilliantly from this amazing storyteller. Spellbinding from prologue to epilogue, this is a must for mystery lovers and fans of K.A. Tucker.

A huge thank-you to the publisher for a copy of this book in exchange for my honest review.