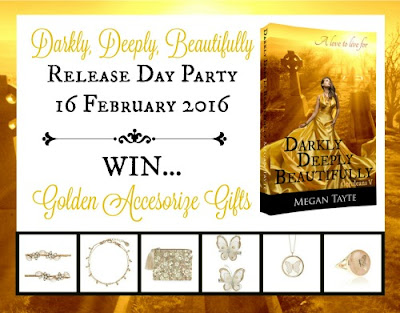 We are so pleased to be a part of the release day party for Darkly, Deeply, Beautifully, the fifth and final book in the Ceruleans series by Megan Tayte.  After the review, please check out the Rafflecopter giveaway that Megan is doing – she is giving away some amazing and beautiful gifts! We have loved every moment of this series, and we wish it could go on forever. 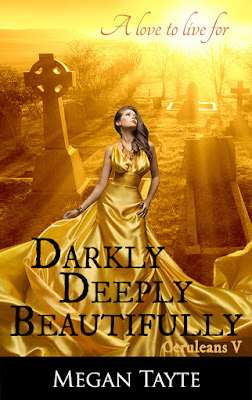 Summary:
DARKNESS HAS FALLEN, AND SHE ALONE WILL SEE THE LIGHT.

With her mother’s life hanging in the balance, Scarlett is devastated – and done with being in the dark. She wants answers, all of them.

But when was her pursuit of the truth ever straightforward?

Pulling a single thread impels a great unravelling. And each revelation will force Scarlett to rethink what she thought she knew about the Ceruleans, the Fallen, her family – herself.

All that came before was a mere prelude to this, the last journey. From London to Twycombe to Hollythwaite to Cerulea, Scarlett will be stalked by the ghosts of what has been, what may have been and what may come to pass. Until she reaches the place where it all began, and it all must end.

But in the final reckoning, none will survive unscathed. And some will not survive at all.

In this explosive conclusion to The Ceruleans series, all must be defined by their actions: sinner, saint… or something more beautiful entirely?

“Once upon a time a boy met a girl.
Birds sang, flowers bloomed: they fell in love.”

Since Darkly, Deeply, Beautifully is the final Ceruleans book, I can't say much about what transpired in the last chapters of this incredible series without spoiling the previous books. But what I can say is that it was beautiful and that I loved it with all my heart. There were so many things in this story that I had waited and hoped for and was so happy to see come true. There were also things in this book that absolutely broke me. Things I never saw coming and still haven’t quite come to terms with. But I know those things were best for a particular character, even if that was not the ending I had imagined for him or hoped so much for. That being said, this conclusion was everything I needed it to be in order to be able to leave these wonderful characters that have found such a special place in my heart. I’ve spent the last year with these characters, with this story, in this world, and turning the last page was like saying goodbye to a piece of me. And while that goodbye is an incredibly hard one, it is not a permanent one. Because I know it won’t be long before I revisit the stunning world of the Ceruleans that has undeniably become one of my all-time favorites. And without a doubt, Megan Tayte has become one of my favorite authors; the writing of this series is absolutely breathtaking and captivating beyond words. This series has been such a beautiful, emotional journey and I can’t wait to relive it all over again.


Thank you so much to the author for providing a copy of this book in exchange for my honest review – and for giving me such an amazing world to fall in love with. 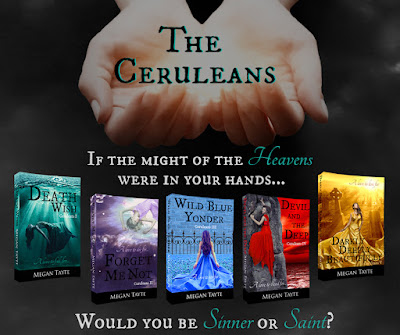 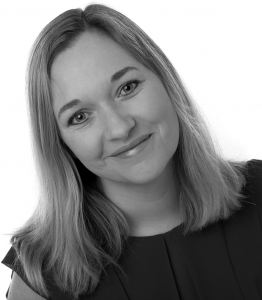 Once upon a time a little girl told her grandmother that when she grew up she wanted to be a writer. Or a lollipop lady. Or a fairy princess fireman. 'Write, Megan,' her grandmother advised. So that's what she did. Thirty-odd years later, Megan writes the kinds of books she loves to read: young-adult paranormal romance fiction. Young adult, because it's the time of life that most embodies freedom and discovery and first love. Paranormal, because she's always believed that there are more things in heaven and on earth than are dreamt of in our philosophy. And romance, because she's a misty-eyed dreamer who lives for those 'life is so breathtakingly beautiful' moments. Megan grew up in the Royal County, a hop, skip and a (very long) jump from Windsor Castle, but these days she makes her home in Robin Hood's county, Nottingham. She lives with her husband, a proud Scot who occasionally kicks back in a kilt; her son, a budding artist with the soul of a paleontologist; and her baby daughter, a keen pan-and-spoon drummer who sings in her sleep. When she's not writing, you'll find her walking someplace green, reading by the fire, or creating carnage in the kitchen as she pursues her impossible dream: of baking something edible.