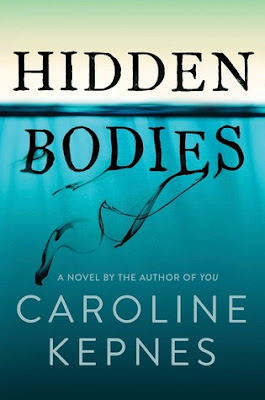 Summary:
In the compulsively readable follow-up to her widely acclaimed debut novel, You, Caroline Kepnes weaves a tale that Booklist calls “the love child of Holden Caulfield and Patrick Bateman.”

Hidden Bodies marks the return of a voice that Stephen King described as original and hypnotic, and through the divisive and charmingly sociopathic character of Joe Goldberg, Kepnes satirizes and dissects our culture, blending suspense with scathing wit.

Joe Goldberg is no stranger to hiding bodies. In the past ten years, this thirty-something has buried four of them, collateral damage in his quest for love. Now he’s heading west to Los Angeles, the city of second chances, determined to put his past behind him.

In Hollywood, Joe blends in effortlessly with the other young upstarts. He eats guac, works in a bookstore, and flirts with a journalist neighbor. But while others seem fixated on their own reflections, Joe can’t stop looking over his shoulder. The problem with hidden bodies is that they don’t always stay that way. They re-emerge, like dark thoughts, multiplying and threatening to destroy what Joe wants most: truelove. And when he finds it in a darkened room in Soho House, he’s more desperate than ever to keep his secrets buried. He doesn’t want to hurt his new girlfriend—he wants to be with her forever. But if she ever finds out what he’s done, he may not have a choice...

If you remember my Loki-inspired review, you know that You by Caroline Kepnes was one of my favorite thrillers in 2014!  Oh, how I missed Joe’s crazy ass and sociopathic tendencies.  We pick up not long after where we left off in the first book, and there are a lot of changes (even geographically) for Joe in this follow-up, some I liked and some I think messed with the formula that made book one such a hit with me.  Don’t get me wrong, there was nothing that could drag me away from this story – I had to find out what was going to happen with my favorite serial killer (sorry, Dexter).  I love Joe, but he has an amazing ability to surround himself with the most annoying characters on the planet.  It’s so strange to root for a psycho.  But you do, and I’d rather not examine what that may say about me… but I know I’m not alone, and crazy likes its company. There are so many stressful situations in this sequel that had me holding my breath numerous times.  Then there were times I became downright cranky, and the open ending did nothing to soothe those ruffled feathers.  Still.  This is a fascinating insight into the psyche of a madman (a lovable and fascinating madman, but a nutter all the same) and human nature at its (less than) finest.  I’m left with conflicted feelings on all but one thing: I need more and preferably this time with closure.

I received this book in exchange for my honest review.

Posted by A Belle’s Tales at 12:46 AM
Email ThisBlogThis!Share to TwitterShare to FacebookShare to Pinterest
Labels: ARCs, Book Reviews