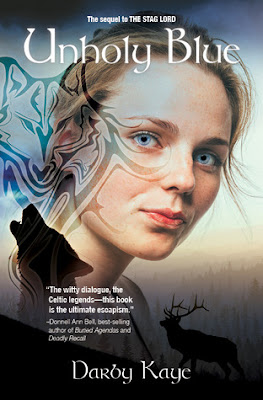 That’s how Shay Doyle likes her whiskey. And men. As Healer to a clan of immortal Celtic warriors living in modern-day Colorado, she has been gifted with such a man: Bannerman “Bann” Boru. The only problem is keeping the stubborn warrior alive. For Fate seems to have it in for Bann, and his son, Cor, descendants of the kings of Ireland, and recipient of an ancient grudge from the mad god, Cernunnos.

But, with a bit o’ luck, Shay, Bann, and the rest of the Doyle clan—along with the aid of a legendary huntsman known as the Black Hand—might just suss out how to kill a shapeshifter that refuses to stay dead, prevent clan warfare, and make a choice that could change their lives.

If they don’t lose them first.

“‘Because she was a friend first, when you both needed one.  And love based on friendship has a thrice-blessed strength.’”

Unholy Blue is the highly anticipated sequel to The Stag Lord, and I could hardly wait to be reunited with my Bann, his son Cor, and my favorite Healer and shield maiden Shay Doyle.  We pick up where we left off with everyone (mostly) recovered from the giant battle at the end of the first book.  After all the excitement and challenges faced in book one, our characters are now attempting to settle into their new lives; and I for one thoroughly enjoyed the normalcy they experienced as they hunted for a new house and worked on their parenting skills for the precocious and adorable Cor.  But in addition to the happy times and the romance, there still lingers the threat of the Tully clan – as well as Cernunnos, the ruthless and vindictive shapeshifter determined to slaughter Bann and the entire Doyle clan so that he might claim Cor for his own nefarious purposes.

But in this sequel, Bann must face his greatest adversary yet.  No, I’m not talking about Cernunnos, nor those awful Fir Bolgs – not even the Amandan… I’m talking about *gulp* Shay’s mother.  Our fierce warrior must not only meet but win over his disapproving future mother-by-law (as they say in the old tongue).  ’Twas a great and terrifying battle, but you’ll have to read the book to see who triumphed.  Lol.

As far as Shay Doyle goes – she makes me proud.  It’s as simple as that.  Bann may be my book boyfriend (That Irish brogue slays me. Every. Single. Time.) – but he is definitely old school, as any fae warrior and heir to the Celtic throne might be.  Shay stands her ground, and her proving to him that his place is beside her, not in front of her protecting her – because Shay is quite capable of handling herself – was one of my favorite parts of this story.  Turns out you can teach an immortal Celtic warrior new tricks ;)

“Which is why I will never stand in her way, but I will always stand by her side.”

I also adored Shay’s relationship with nine-year-old Cor.  She’s quick to remind Bann that “it was a tie which one of you Boru men I fell in love with first.”

Now, that’s really all I can reveal plot-wise, and I won’t go into more detail for fear of giving away things that transpired in book one.  I loved the suspense and of course the action of the hand-to-hand combat as they battled all the beasties that threatened them at every turn.  There’s nothing like the heart and determination of a fae warrior, and I get chills every time they begin to chant the Song of the Tuatha De Danaan.

As always, Ms. Kaye painted a vivid picture with her storytelling and evoked many emotions from this reader, not only with the oft times humorous banter between Shay and Bann (not to mention the funny moments with the hilarious nine-year-old and his canine companion), but also with the way she brilliantly wove a poignant thread through the story that left me choked up more than once. If you’re a fan of the author’s middle-grade series, then you’ll love the special crossover character that had me bouncing out of my chair.  This particular character was written into the story flawlessly, and I adored every minute of the brilliant cameo.  Once again, the supporting cast of characters entertained and thrilled!  It cannot go without mention how much I relished the language and rituals throughout the book.  There is a particular ceremony near the end that was absolutely fascinating to me due to the traditions and customs.  It was full of marvelous details that I delighted in.

Unholy Blue is a wonderful addition to the exciting story of Bannerman Boru.  The Celtic mythology and sizzling romance has this reader begging for more and willing to drop everything for another visit with these enchanting characters!  Faugh a Ballagh!

A huge thank-you to the publisher for a copy of this book in exchange for my honest review.