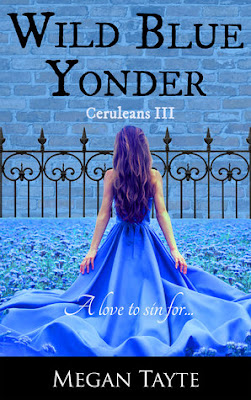 IN A WARPED HEAVEN, SHE MUST CHOOSE HER FATE: OBEDIENCE OR REBELLION

When Scarlett Blake chose life-after-death as a Cerulean, she expected to grieve for all she left behind: her boyfriend, her best friend, her mother, her home. But at least Cerulea, her heaven, would be… well, heavenly. Right?

The world in which Scarlett awakens is very far from her idea of a utopia. Picturesque, sure, and serene. But there can be no paradise within the unforgiving walls of a prison, be they of cold, hard stone or beautifully blue water.

Now Scarlett faces her hardest decision yet: be a good, dutiful Cerulean, or be true to herself and fight for freedom.

And if she can find a way to escape, what then? Can she finally reunite with her lost sister? Can she save Sienna from the murderous Fallen? Can she evade her destiny with the Ceruleans?

Can Scarlett Blake ever reclaim her life-before-death… or must she let go of all she loves?

"But there is no paradise to be had when wings are clipped. There is no Elysium without the freedom to enjoy it.
There is no heaven within the unforgiving walls of a prison, be they of cold, hard stone or beautifully blue water."


This book was, in a word, amazing. It has left me shell-shocked to the point where I'm not sure what to say. So much happened so quickly that it's nearly impossible to talk about the plot without spoiling it. What I can say is that Wild Blue Yonder had me hurting and in tears in the first half and on the edge of my seat, nearly sick with anticipation the next. There were so many new characters that I was unsure of, and one in particular I was very intrigued by. Michael was an interesting character to say the least, and I'm looking forward to seeing more of him.

I love so many characters in this book, but my heart really does belong to Jude. This is one of those instances where I want to climb into the pages and hug the character and tell them everything will be okay. He may not be an angel in a literal sense, but he has the heart of one. Jude is such an amazing character; and as happy as I was with the end of the book, I still worry about him. He has so much on him and tries so hard to do the right thing; he deserves a happy ending, too. I’m eager to start the next installment, Devil and the Deep, to see where the story takes him next.

I still can't believe the turns this book took -- especially in the last chapters. I was about as shocked to finally see what had happened to one particular character as Scarlett was. I really didn’t see that coming. But the ending was so incredibly beautiful I almost didn't mind that some of my questions about said character and some others were left to be answered in the next book.


"And then I realised that Jude had been wrong: This wasn't an ending at all. This was a beginning."

Probably my favorite installment in the Ceruleans series so far, Wild Blue Yonder is an incredible continuation of this beautiful story with surprising twists and revelations but still the same extraordinary writing and amazing characters and world I've come to love. I can't wait to start Devil and the Deep, the fourth and next-to-last book in the series.


"He held out his hand. I took it. And from beyond the grey clouds, the blue liberated us."

Thank you to the author for providing me with a copy of her book in exchange for my honest review.