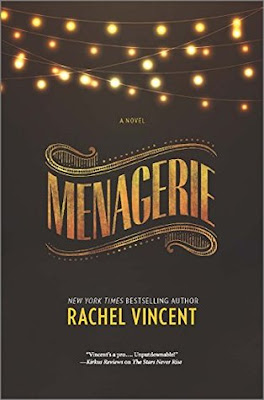 When Delilah Marlow visits a famous traveling carnival, Metzger's Menagerie, she is an ordinary woman in a not-quite-ordinary world. But under the macabre circus black-top, she discovers a fierce, sharp-clawed creature lurking just beneath her human veneer. Captured and put on exhibition, Delilah in her black swan burlesque costume is stripped of her worldly possessions, including her own name, as she's forced to "perform" in town after town.

But there is breathtaking beauty behind the seamy and grotesque reality of the carnival. Gallagher, her handler, is as kind as he is cryptic and strong. The other "attractions"—mermaids, minotaurs, gryphons and kelpies—are strange, yes, but they share a bond forged by the brutal realities of captivity. And as Delilah struggles for her freedom, and for her fellow menagerie, she'll discover a strength and a purpose she never knew existed.

Dark and beautiful, Menagerie is a book I can’t wait to talk about but have absolutely no idea what to say. The story is set in an alternate universe that is much like ours… with the exception that cryptids are real, though denied their rights due to their alleged role in the reaping – and what is the reaping? Something no one ever saw coming… the details of which are brilliantly presented in news reports throughout the book: “Three hundred one thousand babies were born in hospitals across the United States in March of 1980. Not one of them made it home from the hospital.”

Then in 1986, one million children were massacred, with only one child surviving in each family. Those children were changelings, switched at birth – but that's all I'll say on that. Surviving cryptids were either incarcerated – such as in Metzger’s Menagerie, “The Largest Traveling Zoo in the Northern Hemisphere” – or dealt a fate even worse.

The cryptids. Again, I am at a loss for words. They are simply breathtaking and everything you can imagine. Centaurs, phoenixes, griffins, sphinxes, mermaids, werewolves, minotaurs (Eryx owns my heart), oracles… oh, the oracles:


“‘She won't serve her dish cold,' the oracle mumbled, almost giddy with joy
as chill bumps rose all over her skin. 'And two graves won't be near enough…’”

And that delicious crypticness, as well as the above mentioned creatures, barely scratches the surface as to what lives inside the pages of this novel. When Delilah Marlow visits the traveling carnival, she is drawn to the beautiful creatures she once studied but is appalled at their treatment. In one harrowing moment, her outrage transforms her into something that most want to see imprisoned along with the creature she was attempting to defend. And then there’s Gallagher. But you'll just have to meet him yourself.

What follows is a captivating story – one that won’t be for every reader. It intrigues and compels in one moment only to shock and repulse you in the next. There is so much underlying meaning here – it becomes not just a thrilling fantasy but a thought-provoking look at ethics and humanity and even animal rights. It is beautiful while ugly. It draws you in and pushes you away. And I loved every single line of it.

As difficult as it is to put my feelings into words, it is very easy to recommend this book to my like-minded reading friends. This is a book that has continued to stay with me weeks after I finished it and probably always will.

Beautifully written with multiple POVs that offer an insightful look into the menagerie and its many characters, this book is graphic and contains mature themes not for young readers. It is NOT a romance… though I did fall in love. Menagerie does not end with a cliffhanger but does set up nicely for a sequel that I can hardly wait to get my hands on. There is so much more in store for these characters, and I for one will be first in line come release day to see how it all plays out.

Posted by A Belle’s Tales at 2:37 AM
Email ThisBlogThis!Share to TwitterShare to FacebookShare to Pinterest
Labels: ARCs, Book Reviews, Menagerie, Rachel Vincent