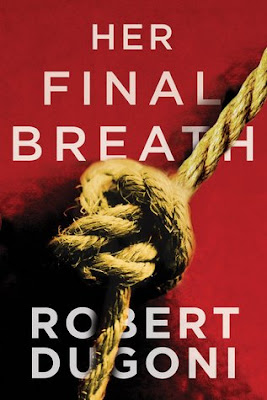 Homicide detective Tracy Crosswhite has returned to the police force after the sensational retrial of her sister’s killer. Still scarred from that ordeal, Tracy is pulled into an investigation that threatens to end her career, if not her life.

A serial killer known as the Cowboy is killing young women in cheap motels in North Seattle. Even after a stalker leaves a menacing message for Crosswhite, suggesting the killer or a copycat could be targeting her personally, she is charged with bringing the murderer to justice. With clues scarce and more victims dying, Tracy realizes the key to solving the murders may lie in a decade-old homicide investigation that others, including her captain, Johnny Nolasco, would prefer to keep buried. With the Cowboy on the hunt, can Tracy find the evidence to stop him, or will she become his next victim?

Move over, Olivia Benson. I have a new favorite female detective, and her name is Detective Tracy Crosswhite! I first fell in love with Tracy in My Sister’s Grave, as well as with Robert Dugoni’s writing. If legal thrillers are a genre you shy away from but perhaps, like me, you’re a big Law & Order SVU fan – this is a series you need to try. These books bring all the qualities about that show that I love but take them to much better, more intense levels while remaining unique in the storytelling.

In My Sister’s Grave, Detective Crosswhite had to leave an investigation when she received news about her missing sister. That book was fantastic, but I did wonder what happened to the case she had left behind. The brilliance of Her Final Breath is it answers that question and ties in with the recent murders of young women whose bodies have been discovered in seedy motels. Tracy and her partner Kinsington Rowe are on the hunt for this serial killer known only as “the Cowboy.” Captain Nolasco (who I hate with the fire of a thousand suns) appoints Tracy lead detective, but is it because the Captain finally sees what a great detective Tracy is or because he’s sure she’ll fail and he could be rid of her once and for all?

Not only do we have a terrifying killer in our midst, but Tracy soon realizes she’s also being targeted. There’s the “message” left for her at the shooting range, and someone is definitely watching her. When Tracy meets with FBI profiler Amanda Santos (an awesome new kick-ass character who I hope to see more of), Amanda brings of lot of insight as to what makes this killer tick. And when Kins asks if it’s possible the Cowboy could be Tracy’s stalker:

It’s not easy being a female detective in this boys’ club, and Nolasco has had it out for Tracy for years (did I mention that I hate him?). Tracy is determined, and she is fierce; and I love how she handles herself in this male-dominated profession and still manages to put a certain misogynist in his place so beautifully! Let your inner feminist roar because Tracy is everything we need in a great female heroine.

The secondary characters I grew to love in the first novel are back, and I adore them all: Attorney Dan O’Leary, as well as Crosswhite’s partner Kins. And my two favorites, Rex and Sherlock, also make an endearing appearance. Along with the addition of Santos, I have to add Faz to the list now because I loved having him in this sequel.

I can’t say any more about the storyline, but I loved how suspenseful it was – and of course it’s always fun trying to be a step ahead of the detectives. I don’t actually enjoy many legal thrillers, but I do if Mr. Dugoni is the one writing them. The pacing is great, the writing will have you on the edge of your seat, and the research the author clearly does shows. I love this series, and I want more, more, MORE!

“Remember, while you’re out there trying to find out who this guy is,
he already knows who you are.”

Her Final Breath is available for purchase today:

And be sure to pick up My Sister's Grave, book one in The Tracy Crosswhite series - currently only $1.99 for Kindle edition!