Review: The Fellowship of the Ring by J.R.R. Tolkien 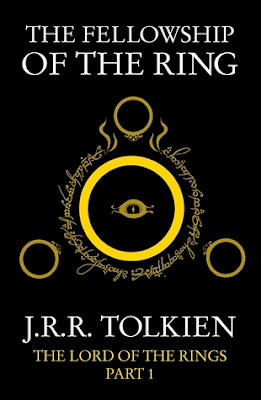 One Ring to rule them all, One Ring to find them,
One Ring to bring them all and in the darkness bind them

In ancient times the Rings of Power were crafted by the Elven-smiths, and Sauron, the Dark Lord, forged the One Ring, filling it with his own power so that he could rule all others. But the One Ring was taken from him, and though he sought it throughout Middle-earth, it remained lost to him. After many ages it fell into the hands of Bilbo Baggins, as told in The Hobbit.

In a sleepy village in the Shire, young Frodo Baggins finds himself faced with an immense task, as his elderly cousin Bilbo entrusts the Ring to his care. Frodo must leave his home and make a perilous journey across Middle-earth to the Cracks of Doom, there to destroy the Ring and foil the Dark Lord in his evil purpose.

J.R.R. TOLKIEN (1892-1973) is one of the twentieth century's best-loved writers. His books, which include The Hobbit, The Lord of the Rings, and The Silmarillion, have been translated into more than thirty languages and have sold many millions of copies worldwide.

At the end of the school year, I had to do an Author Project. I chose J.R.R. Tolkien because I adore the Lord of the Rings movies, but I had never read any of the books and I wanted to start the series and learn more about Tolkien himself. For the project, I had to do a short review of a biography on Tolkien, a critical review of one of his works, and a research paper on his life. I really enjoyed learning about Tolkien and how this amazing story came to be. So I revised my critical review of The Fellowship of the Ring into a more blog-friendly review and decided to share it here today!

The Fellowship of the Ring, the first installment in J.R.R. Tolkien's Lord of the Rings trilogy, is a fantasy story that follows the life of Frodo Baggins on his journey to destroy a ring born of dark magic. Frodo's mission begins when his uncle Bilbo Baggins flees the Shire, home to many hobbits, leaving Frodo with the deadly ring. Anyone who wears the ring for an extended period of time will be invisible to most; but while doing so, the sanity of the ring wearer will slowly diminish, and their location will be exposed.

The plot of The Fellowship of the Ring is fast-paced, exciting, and easily keeps the reader interested in this unique fantasy world Tolkien has created. As Frodo and his comrades (Samwise Gamgee, Gandalf the Grey, Aragorn, Legolas, Boromir, Gimli, Merry Brandybuck, and Pippin Took) begin the quest to Mordor, they encounter creatures and challenges of all varieties, making this story an exciting expedition for the reader similar to the journey within the pages of The Fellowship of the Ring.

Tolkien's vivid and descriptive writing style only adds to the already enthralling content of The Fellowship of the Ring, making the story easy to see in the reader's mind and consequently adding to the effect of the story itself.  The descriptions of the Shire and its residents bring this region to life, as seen in this quote describing Bilbo Baggins's party:

"There were green trees with trunks of dark smoke: their leaves opened like a whole spring unfolding in a moment, and their shining branches dropped glowing flowers down upon the astonished hobbits, disappearing with a sweet scent just before they touched their upturned faces. There were fountains of butterflies that flew glittering into the trees ..."

The characters in The Fellowship of the Ring were both entertaining and charming; many of the characters -- in particular, hobbits Frodo Baggins and Samwise Gamgee -- steal the reader's heart with their witty humor and determination to do what is right. While this story contains many antagonists, Tolkien also gives the reader a plethora of lovable and relatable characters.

The Fellowship of the Ring is a brilliantly developed story with an intriguing storyline, vibrant and descriptive writing, and endearing characters. It is no surprise that the Lord of the Rings trilogy has been loved by so many for such a long period of time, and it will undoubtedly continue to be loved for years to come.

"There is a seed of courage hidden (often deeply, it is true) in the heart of the fattest
and most timid hobbit, waiting for some final and desperate danger to make it grow."