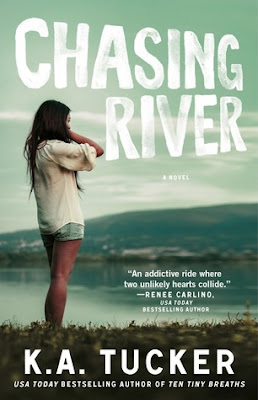 Armed with two years' worth of savings and the need to experience life outside the bubble of her Oregon small town, twenty-five-year old Amber Welles is prepared for anything. Except dying in Dublin. Had it not been for the bravery of a stranger, she might have. But he takes off before she has the chance to offer her gratitude.

Twenty-four-year-old River Delaney is rattled. No one was supposed to get hurt. But then that American tourist showed up. He couldn't let her die, but he also couldn't risk being identified at the scene—so, he ran. Back to his everyday life of running his family’s pub. Only, everyday life is getting more and more complicated, thanks to his brother, Aengus, and his criminal associations. When the American girl tracks River down, he quickly realizes how much he likes her, how wrong she is for him. And how dangerous it is to have her around. Chasing her off would be the smart move.

And River isn't the kind of guy she'd want to catch.

Ireland is one of my favorite places that I’ve never been but can’t wait to visit. It’s at the top of my bucket list, which is funny and amazing since this book is all about main character Amber Welles’s bucket list and her first time visiting this beautiful country. I knew a little about Amber from Burying Water, and I admit I wasn’t sure how much more I wanted to know about her. While I’m crazy about Amber’s brother Jesse, I didn’t think I would be able to relate to her. And I didn’t… at first. Some of Amber’s innermost thoughts rubbed me the wrong way, even though it was pretty easy to forgive her for having them because she really is a nice person – she’s just lived life in a bit of a bubble in her small town. I have to give the girl props, though – I find it so courageous that she would take this trip all alone, and that in itself began to soften me up towards Amber. See, Amber views the world and all its people much the way she believes her father does: in black and white. What we readers learned from book one is that Sheriff Gabe Welles discovered that there is a lot more gray area in life. And Amber’s journey is about to lead her to the same conclusion. I love the awakening that she has as well as the growth of character.

So speaking of Jesse, I couldn’t imagine loving a character in this series as much as I loved him. And then River Delaney happened. From the moment he risked his life to save Amber, a complete stranger, he had my full attention; and the more I learned about him… the harder I fell. I adore his family – especially his youngest brother Rowen. And Ivy was such a treat! I also loved the visits with Sheriff Welles, and especially Alex and Jesse. It was like seeing old friends and in the same moment making new ones.

But my absolute favorite aspect of this story is the history of Ireland. I was absolutely engrossed as I learned more about the IRA, the RIRA, the potato blight, and famine. Sorry, Mr. White, but if Ms. Tucker had been teaching me this stuff in school, I would have done a lot better than a B. ;) The stunning details and the beautiful stories within the story (Marion and Charles *sob*) are breathtaking. Amazing detail, intriguing secondary characters, vibrant descriptions, and so much incredible history have me recommending this book to all readers! Chasing River just stole first place for me, and even though I only finished it last night… I can hardly wait to read it again.

“And then I want to come back here… and tell you a story about a lowly Irish peasant bartender
who falls in love with a beautiful American princess.”