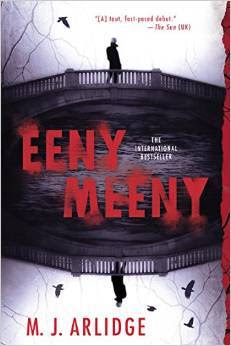 Two people are abducted, imprisoned, and left with a gun. As hunger and thirst set in, only one walks away alive.

It’s a game more twisted than any Detective Inspector Helen Grace has ever seen. If she hadn’t spoken with the shattered survivors herself, she almost wouldn’t believe them.

Helen is familiar with the dark sides of human nature, including her own, but this case—with its seemingly random victims—has her baffled. But as more people go missing, nothing will be more terrifying than when it all starts making sense....

Though I was intrigued by this book’s unsettling synopsis, I struggled in the beginning with this read; however, the premise was so interesting that I persevered in spite of this not really being the “me” book I originally thought it was… and I’m glad I did.

The predator always takes two. Two people are abducted and locked away with no water supply, no food, and no way out. The only thing their captor leaves them is a gun with one bullet and a cell phone with low battery, pin protected, and with a single message: decide who will use the gun and the survivor goes free. Eeny Meeny Miny Moe.

One of the most absorbing things about this story is that the victim who lives ends up suffering more than the person who died. The guilt the survivor lives with eats away at them, and they will never be the same. It’s up to Detective Inspector Helen Grace to find the sick mastermind behind this twisted scheme and put an end to these violent games – even as she realizes she may have a connection to the killer.

Helen is a unique heroine in the fact that it’s her job to dig into people’s lives and their pasts in order to solve a crime, but she is a completely closed book when it comes to her own past and she is harboring some pretty huge secrets herself. I felt for her; and though distressed by the outlet she took to cope with certain issues, I’d like to see if the author further explores that particular twist in following installments.

There was A LOT going on in this book. With a lot of different characters. At times it felt like too much; but then again, I was very interested in each character’s POV. Especially a particularly sneaky one. Detective Sergeant Mark Fuller and Detective Constable Charlie Brooks were a captivating and valuable addition to the story. I enjoyed both of them very much. This was a very different writing style for me – much grittier and more abrupt than I usually read – but it worked for the story.  I want to stress that this is a graphic story with mature themes and not intended for young readers. The last abduction contained a scene that was one of the most disturbing things I’ve read. And I’m usually not a squeamish person in the least. But that detail?

Holy yuck. It takes a lot to gross me out, but I need a delete option because I don’t want this in my brain. To paraphrase Kramer: It was a loathsome, offensive scene... yet I could not look away.

This story moved at a quick but at times uneven pace with lots of twists and turns; and though the transitions weren’t the smoothest, it was still an exciting read. So aside from the above mentioned gripes, I think I’m invested enough to read more about this enigmatic detective. She’s a puzzle, and I’m very curious to see what happens next in the sequel, Pop Goes the Weasel.

Huge thank-you to Penguin for a copy of this book in exchange for my honest review.