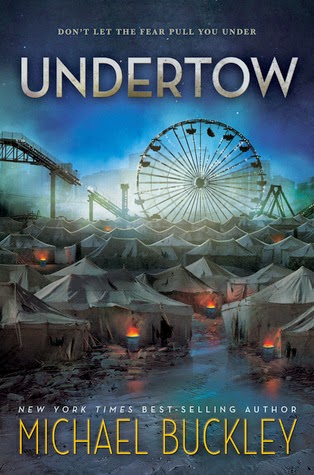 Sixteen-year-old Lyric Walker’s life is forever changed when she witnesses the arrival of 30,000 Alpha, a five-nation race of ocean-dwelling warriors, on her beach in Coney Island. The world’s initial wonder and awe over the Alpha quickly turns ugly and paranoid and violent, and Lyric’s small town transforms into a military zone with humans on one side and Alpha on the other. When Lyric is recruited to help the crown prince, a boy named Fathom, assimilate, she begins to fall for him. But their love is a dangerous one, and there are forces on both sides working to keep them apart. Only, what if the Alpha are not actually the enemy? What if they are in fact humanity’s only hope of survival? Because the real enemy is coming. And it’s more terrifying than anything the world has ever seen.

Action, suspense, and romance whirlpool dangerously in this cinematic saga, a blend of District 9 and The Outsiders.

Unique, fascinating, and enormously addictive. Those are the words I’d use to describe Michael Buckley’s Undertow.

Three years earlier, life for the people of Coney Island changed radically when 30,000 Alpha arrived on the beach from the Bay. What followed was intense paranoia, violence, segregation, political corruption, and a whole lot of fear and hate. Now considered a military zone, Coney Island is divided with Alphas on one side and humans on the other. But who are the real monsters? This species from the sea or the humans who allow fear to drive them to discrimination and intolerance? Some of the more open-minded people who tried to befriend these visitors have been found dead. But at whose hands?

I’d like to note this is NOT a mermaid book – not there is anything wrong with that. I have read one mermaid series and loved it, but I would be saddened by the thought that a reader would shy away from this book because they thought it was all about mermaids if mermaids aren’t their cup of aquatic tea. Picture alien invasion but from below instead of above. The Alpha are a five-nation race – warriors that are alike in many ways but with many differences. In other words, not all Alpha are created equally. There are mer-people, but there are also many other categories such as Sirenas, Selkie, Nix, and Ceto. Warriors who carry weapons, and warriors whose bodies are the weapons. Blades that come out of arms, or gills on the sides of faces; some have teeth, others claws, and some colorful scales. So bottom line: not an Ariel in the bunch, but if the above mentioned creatures are your kind of chicken of the sea… then you’re good to go.

The government attempts integration and insists that the Alpha kids attend the public school. Lyric Walker, her best friend Bex, and their friend Shadow begin their journey to school under police escort. The way in is lined with protesters showing off signs and grotesque creations to express their disgust.


“Ah, papier-mâché!  With a little flour and water, there’s no limit to the hate you can make.”

It’s bad enough to fight their way through the lunatics and have fish heads tossed at them; but not long after locking eyes with Fathom, the prince of the Alpha (who seems very familiar to Lyric), she learns that she has been assigned to help assimilate him. When Lyric realizes that Fathom doesn't know how to read, she offers to tutor him during their time together. So, in the hopes of setting a good example for other students and to prove the Alpha are not as frightening as they seem… Lyric has a book buddy. As exciting as this story was – and I really did enjoy it – it was Lyric teaching Fathom to read that was the highlight of the book for me. It was so incredibly endearing:

"'All right, well, reading, then.' I look into the sack and recognize the books immediately: The Snowy Day, The Cat in the Hat, Hop on Pop, Harold and the Purple Crayon, a few others. My dad read them all to me when I was little, and then after I learned how, I read them to myself. I think Mrs. Sullivan is right. Keeping it simple for him seems like a good place to start. I hand a few to him. He stares down at them and flips through their pages, turning them end over end, inspecting every page, and running his fingertip along the edges of the paper. I watch his fascination with them and realize he has probably never held a book before."

And Fathom took everything so literally! He couldn’t grasp Goodnight Moon – why say goodnight to a chair and a balloon? And the poor guy was truly bewildered by the smiling fish in One Fish, Two Fish, Red Fish, Blue Fish. Why? Because as he says, “Fish are not funny.” And he would know.

As Lyric and Fathom’s friendship grows, other students take notice –  especially those classmates belonging to the Coney Island Nine, Niners for short. And that’s when the real trouble begins.

And it’s not just inside the school where things start falling apart – Lyric’s home life is undergoing drastic changes as well. Then there’s Bex, who stays over as much as possible to avoid a very different kind of monster – one just as frightening as those that rose from the ocean.

Ocean-dwelling warriors, bullying, prejudice, domestic abuse, family, friendships, and one seriously intense battle made this book a page-turner that I couldn’t put down. I mean, holy mackerel (couldn’t resist)! This was a book that took me by surprise, and I can hardly wait to get a copy for my teen, who is going to adore it. Wonderful characters – Lyric, my little “wild thing,” is an amazing MC and wonderfully written teenage girl. There were plenty of secondary characters to love, as well as some I couldn’t possibly love but were still wildly enthralling. Fans of world-building may want more, but it was the perfect amount of detail for this reader – too much and I get twitchy. This story has a good message, a great heroine, and all the snark you could hope for. The ending is by no means the worst cliffhanger I’ve read lately so it didn’t leave my emotions in too much of a tangle. No abrupt conclusion mid-battle or anything like that, but it DID leave me with a lot of questions that guarantee two things: 1) I won’t forget this book, and 2) I will definitely be reading the next installment, Raging Sea, in 2016.

Posted by A Belle’s Tales at 2:33 AM
Email ThisBlogThis!Share to TwitterShare to FacebookShare to Pinterest
Labels: ARCs, Book Reviews, Undertow, Young Adult