Review: Into the Deep (#1) by Samantha Young 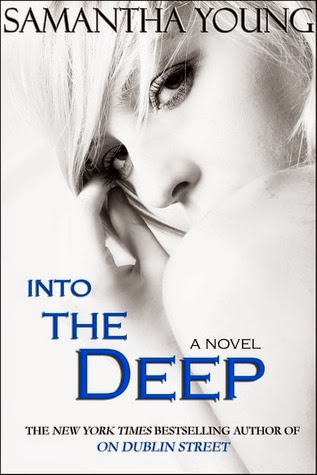 Charley Redford was just an ordinary girl until Jake Caplin moved to her small town in Indiana and convinced her she was extraordinary. Almost from day one Jake pulled Charley into the deep and promised he was right there with her. But when a tragic incident darkened Jake’s life he waded out into the shallows and left Charley behind.

Almost four years later Charley thinks she’s moved on. That is until she takes a study year abroad in Edinburgh and bumps into none other than Jake Caplin at a party with his new girlfriend. The bad-boy-turned-good attempts to convince Charley to forgive him, and as her best friend starts spending time with Jake’s, Charley calls a truce, only to find herself tumbling back into a friendship with him.

As they grow closer, the spark between them flares and begins playing havoc with their lives and relationships. When jealousy and longing rear their destructive heads, Charley and Jake struggle to come to grips with what they mean to one another.

And even if they work it out, there is no guarantee Charley will ever trust Jake to lead her back into the deep…

“You’re it for me.  They write books about what we have.”

I really enjoyed Into the Deep; and while the story has a much younger feel than the Dublin Street series, it is very absorbing and the characters extremely engaging. Charley and Jake’s story is told in flashbacks – something I tend to be impatient with, but Samantha Young captures my attention so fully that I willed myself to wait and let her do her thing… which in this case is to write the past and present flawlessly.

Jake and Charley shared a beautiful and intense relationship during high school, but when tragedy struck it broke them apart and Jake’s decisions changed them both irrevocably. Four years later, when Charley is accepted into Scotland’s study abroad program, something she has planned and wanted to do for years, she is shocked to find that Jake is also in the program... and he brought a friend. His current girlfriend, to be exact. What follows is an emotional and gripping story of young love.

We talk a lot about book boyfriends here on the blog. The swoon-worthy, sexy fictional characters that make our hearts flutter. But I absolutely LOVE when an author gives me a female MC that I completely adore. I was enamored with Charley from the start. She’s smart, snarky, and witty; and she has done so many self-sacrificing and honorable things that she’s earned the nickname “Supergirl,” along with earning a permanent place in my heart.

I liked Jake, and I truly believe he’s a good guy… but he hurt my Charley, and I felt so close to her that I felt every hurt she did and my heart broke right along with hers. I think there’s a great message in this story about good people making bad choices and the power of forgiveness.

Another character that I couldn’t get enough of was Lowe. He’s so charming and mysterious. He has a lot of story to tell, and I would love to read every single word of it.

My only complaint is the ending (or lack thereof). Things are happening in the story that I am enjoying and things are unfolding that I very much want to be privy to… when all of a sudden… to be continued. Sigh. This seems to be a growing trend in some of my favorite books and one I’m not a fan of. But frustrated as I was, I still grabbed Out of the Shallows because I MUST find out what happens to these characters and what choices they will make.

This book is a captivating page-turner with engaging characters and the heartbreak they experience as they choose different paths that can only lead back to each other.

Note: Though parts of the story focus on the MC’s as teens, there are mature situations throughout that place this book in the NA category for me and that I would not deem suitable for my young teen.

Posted by A Belle’s Tales at 1:04 AM
Email ThisBlogThis!Share to TwitterShare to FacebookShare to Pinterest
Labels: Book Reviews, New Adult, Samantha Young