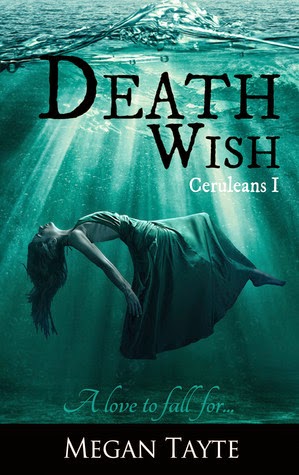 Seventeen-year-old Scarlett Blake is haunted by death. Her estranged sister has made the ultimate dramatic exit. Running away from school, joining a surfing fraternity, partying hard: that sounds like Sienna. But suicide? It makes no sense.

Following in her sister’s footsteps, Scarlett comes to the isolated cove of Twycombe, Devon, with grand plans to uncover the truth. Alone. But she hasn’t reckoned on meeting two boys who are determined to help her. Luke: the blue-eyed surfer who’ll see the real Scarlett, who’ll challenge her, who’ll save her. And Jude: the elusive drifter with a knack for turning up whenever Scarlett’s in need.

As Scarlett’s quest for the truth unravels, so too does her grip on reality as she’s always known it. Because there’s something strange going on in this little cove. A dead magpie circles the skies. A dead deer watches from the undergrowth. Hands glow with light. Warmth. Power.

What transpires is a summer of discovery. Of what it means to conquer fear. To fall in love. To choose life. To choose death.

To believe the impossible.

Scarlett Blake always loved visiting her grandparents in Twycombe. The little oceanside town has always felt more like home than the grandiose house and city she grew up in. But now the happy memories of her childhood have been replaced with darkness since her sister committed suicide in the very ocean they played in as children. And Scarlett's determined to find out why.

When they were younger, Scarlett and Sienna were always close and knew each other better than themselves, but as they grew older they gradually drifted further and further apart. Still, it's beyond Scarlett why Sienna would take her own life. Granted she'd run away from home and been acting strange even before, but what had pushed her over the edge? What had made her end it all? Scarlett hopes that being back in the place they'd spent so much time at in their childhood would help her clear her mind and be able to piece together the mystery of her sister's death. But she ends up getting so much more than she bargained for.

Scarlett was a likable main character. She made some choices that had me shaking my head and tsking under my breath, but that made her real, and I adore real, true-to-life characters. I also fell hard for several of the other characters as well -- Cara, Bert, Chester, Si ... and Jude. Jude, Jude, Jude... it's hard to know how to describe Jude. You think you have him figured out, you think you know him, but in a split second, you're left guessing again. I loved this character, though, and I wish he'd been more present, but I have a feeling we'll be seeing much more of him in the next installment, Forget Me Not, and I can't wait to pick it up and find out.

Another character I hope we'll definitely be seeing more of is Luke. Luke has such a kind heart, and you can't help but love him just as much as Scarlett does. I loved Luke and Scarlett's relationship, and I very much wish I had a Luke myself. Everything about them, from the way they met to the conversations they had, brought a much needed dose of happiness and normalcy into Scarlett's life.

I also loved the songs mentioned throughout the story and how they all tied in with their scenes. Some of them I knew and some of them were new to me, so I loved that along with a beautiful story I got some new music as well.

The plot of Death Wish is so intricately woven that I don't want to tell too much about it in fear of giving something away, but I will say that this is a wonderfully paced, edge-of-your-seat mystery infused with humor and heart, extremely lovable characters, and vivid writing. I thoroughly enjoyed it, and Megan Tayte is definitely going on my auto-buy list :)

"In a little over a day ... I'd amassed more happy memories than the past month, year -- lifetime? -- had given me. I would always look back on this summer, I knew, and live in these memories."

I received a copy of this book from the author in exchange for my honest review.