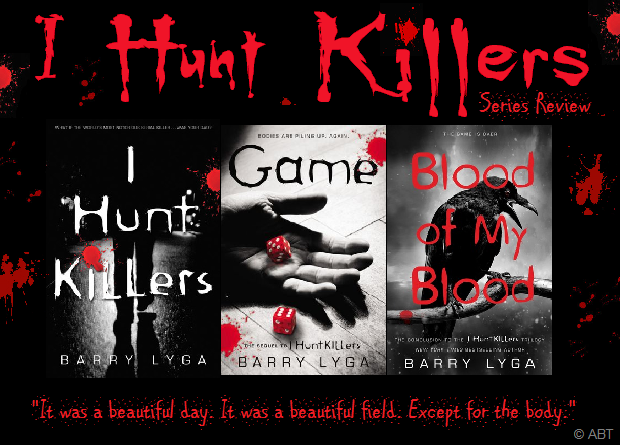 I won a copy of I Hunt Killers when it first released in 2012.  I fell in love with the creeptastic cover and tagline. Feast your eyes on this beautiful cover, with and without the book jacket:

So why didn’t I drop everything and read it right then? No, really… why? I’m hoping someone can explain this to me because I’m kicking myself. When I was invited to read an ARC of the second book in celebration of the third book’s release, I knew it was past time for me to meet Jasper Dent. Guys, I lost an entire weekend to this series. I loved it so much that I had a difficult time moving on to another read. Massive book hangover here. Here are my thoughts on this incredibly brilliant series:

This concept is so unique; and even though it’s chilling, it’s incredibly appealing to readers that love an edge-of-your-seat thrill read. Jasper (Jazz) Dent is a very easy character to love. He’s this adorable teenage boy who, at first glance, you think “I’d so be friends with him!” Then you read through a few more of his inner dialogues and unguarded thoughts and decide… well, Facebook friends. I kid -- I really adore Jazz. You see, Jasper is dealing with some pretty serious stuff. His father is the world’s worst serial killer who, as Jasper puts it, “For Dear Old Dad, Take Your Son to Work Day was year-round.”

Jasper’s childhood and the lessons his father taught him have made him an exceptional and highly skilled profiler. Growing up witnessing crime scenes from the killer’s point of view gives him an incredible insight and rare knowledge that could really aid law enforcement into solving the mysterious murders terrorizing the town of Lobo’s Nod… that is, if police officers actually wanted the help of a psychopath’s offspring. One thing is definite: you can’t help but feel for the guy. He’s haunted – and not just by his infamous serial-killer father, but by himself. He’s so afraid he has what it takes to turn into his dad, but he’s determined that he won’t. Most boys his age are thinking about girls, cars, girls, school, and girls. But Jasper can’t stop thinking about how to stop his small town’s newest serial killer and how to not become one. And girls. Well, one girl in particular. Connie. Then there’s Jasper’s grandmother, his legal guardian. She’s not only senile, but she’s racist, delusional, and… well, there’s no nicer way to put this… batshit crazy. Jasper really doesn’t have it easy.

Along with Connie and Jazz’s best friend Howie, Jazz is going to solve these murders and prove to everyone around him that he is NOT like his father. But first, he has to prove it to himself.

I love the writing. Barry Lyga can tell a story that keeps you mesmerized from beginning to end. He flawlessly moves from heart-breaking to heart-warming to heart-pounding moments that command your attention. I Hunt Killers has that dark and twisty quality that I love with its own distinct blend of mystery and intensity.  This series has amazing secondary characters that are so well developed you can’t get enough of them, either. I just love G. William, the sheriff of Lobo’s Nod. And Howie. Can we talk about how much I adore that tall, awkward, bleeding drink of water? Howie is much needed comic relief that comes in the form of a hemophiliac and the most loyal best friend a guy could have. Billy Dent, Jasper’s father, is horrifying… yet, dare I say… charming?!? His presence is felt even in his absence. He’s the devil on Jasper’s shoulder, his personal “dark passenger.” Billy is brilliant and so wrong that you can’t help but be terrified of him and yet grudgingly be in awe of the methods to his madness.

I’d suggest this book to all of my reading friends – but especially to those who have hit a slump or feel that the young adult genre can’t surprise them anymore. Prepare to be impressed.

This is one powerful sequel. The author takes Jasper out of his comfort zone of Lobo’s Nod and puts him in NYC. Fish out of water, much? But the gruesome murders taking place in the city have the police officers at the end of their rope. They need Jasper’s expertise to find out who’s behind the latest killings. Jazz finds himself playing a very dangerous game, indeed. Is Jazz the king in this twisted match, or is he just a pawn? I can’t say much about the plot because I don’t want to give a single thing away. Readers will want to unravel things on their own. I loved this installment; but I have to warn you, this book doesn't end with just one cliffhanger… it ends with three. THREE. That’s right, all three of our beloved fictional friends are left in the holy trio pickle of predicaments!!! What fresh hell is this, Mr. Lyga??!?? It’s devious, excruciating… and kind of delicious… because luckily, I already had the next book in my hands. This is one sequel you don’t want to miss!

I was so excited to read this final installment, yet I dreaded it coming to an end. I really grew attached to these characters, and I was afraid to find out what the author had planned for them. A fantastic opening that picks up where we left off and a high powered chase begins. Is the son being punished for the sins of the father, or is this where we learn the apple doesn’t fall far from the tree? Monster or man is the question of the day and finally… will the real Crow King please stand up!!

Again, I can’t say too much because it is imperative the reader uncovers the answers for themselves. This is a truly wonderful conclusion. Certain things were uncomfortable for me to read about because they broke my heart, but I admire the way the author gave Jasper and the readers the answers they craved. I highly recommend this series to fans of the genre and anyone desiring an electrifying and hypnotizing story. This book really sticks with you, and it’s difficult to move on after spending time in Jasper’s world. I’m excited to explore the novellas that accompany the series because I really can’t say goodbye just yet.

In case my words weren't enough to convince you, how about a mental image to go along with them? (Thanks to Little, Brown Books for Young Readers for the incredible book trailer)

Posted by A Belle’s Tales at 1:21 AM
Email ThisBlogThis!Share to TwitterShare to FacebookShare to Pinterest
Labels: ARCs, Barry Lyga, Book Reviews, I Hunt Killers