Review: My Soul to Save (Soul Screamers #2) by Rachel Vincent 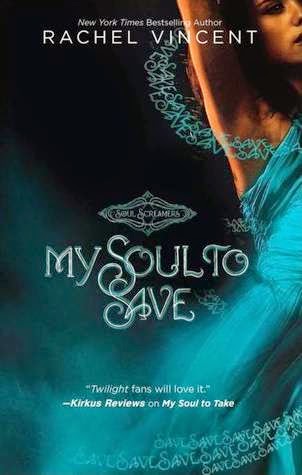 When Kaylee Cavanaugh screams, someone dies.

So when teen pop star Eden croaks onstage and Kaylee doesn’t wail, she knows something is dead wrong. She can’t cry for someone who has no soul.

The last thing Kaylee needs right now is to be skipping school, breaking her dad’s ironclad curfew and putting her too-hot-to-be-real boyfriend’s loyalty to the test. But starry-eyed teens are trading their souls: a flickering lifetime of fame and fortune in exchange for eternity in the Netherworld—a consequence they can’t possibly understand.

Kaylee can’t let that happen, even if trying to save their souls means putting her own at risk...

We start out with Kaylee Cavanaugh and her boyfriend Nash Hudson at a concert that Nash's brother Tod scored them amazing tickets to. One of Kaylee's favorite singers, Eden, suddenly collapses during the show; and before anyone can do anything about it… she's dead. Just like that. In the middle of her own concert. Kaylee is shocked when her newly discovered “gift” fails to let her know that Eden was going to die.  How could she not have known? But she soon finds out that you can't guide a soul… when there's no soul to guide.

My Soul to Save jumps right into the action and chaos. Soon after the incident at the concert, Kaylee, Nash, and Tod find out that Eden sold her soul for fame and fortune – and then that Tod's rock star ex-girlfriend Addison Page, who just opened for Eden, did the same thing and will die in just four days.

This book had so many different aspects to it and so many things going on that I don't want to go into too much detail in fear of giving anything away. That being said, the pacing was good. It did have a lot going on, but it wasn’t so much that it was too fast or hard to keep up with. It was just enough to keep me intrigued, and I had trouble putting it down the few times that I did (*shakes fist at homework*). The ending was heart-breaking and unexpected but beautifully done. Ms. Vincent's writing is just as stunning as always, and her descriptions and world-building truly bring the story to life. This is a book I definitely see myself re-reading in the future.