Review: My Soul to Take (Soul Screamers #1) by Rachel Vincent 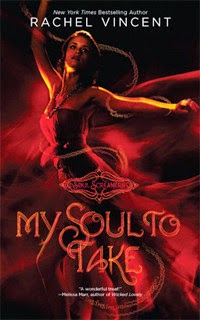 She doesn't see dead people. She senses when someone near her is about to die. And when that happens, a force beyond her control compels her to scream bloody murder. Literally.

Kaylee just wants to enjoy having caught the attention of the hottest guy in school. But a normal date is hard to come by when Nash seems to know more about her need to scream than she does. And when classmates start dropping dead for no apparent reason, only Kaylee knows who'll be next.

"He was afraid I would see too much.
And maybe that too much would see me."

My mom read the first book in the Soul Screamers series over a year ago, and she's been trying to get me to read it ever since. So this week, we finally buddy-read it -- and now... I'm hooked.

I mean, how couldn't I be? This is a world unlike any other I've entered into before -- bean sidhes, reapers, hellions? It may be different, but I'm in love. I'm only on the second book right now, and I already can't get enough of this series. Ms. Vincent's writing style is so beautiful and descriptive, and the characters and story she has created are so unique and exhilarating.

Kaylee Cavanaugh is a sixteen-year-old girl living with her aunt and uncle and less-than-endearing cousin. Her life is normal for the most part -- except for one thing. She can tell when someone's about to die. She doesn't know how, or why -- but she just knows. It's happened before, and it landed her in the mental health unit for a week. And now it's happening again. She and her best friend Emma sneak into a club for a night of innocent fun, only for Kaylee to see a girl engulfed in an ominous dark gray shadow, and she's positive that the girl won't have long to live. And also just like the last time... she feels it coming. The scream. It's the main reason she got committed before. The one thing that is different? This time, she's about to humiliate herself in front of one of the most popular guys in school and someone Kaylee's always found extremely appealing: Nash Hudson. But instead of being scared off by Kaylee's impending attack, Nash actually stays right by her side and ends up being the first person to ever see her through one of these "panic attacks." Kaylee is eventually able to calm down and leave the club they're at... but it's not over. The next morning, on the news, there's the girl Kaylee saw last night. The one Kaylee knew was going to die. And she did.

It's the first time, as far as Kaylee knows, that her "premonition" has come true. And she's overwhelmed with the guilt that has come with it. Guilt that she couldn't save the girl, that she hadn't even tried to. But soon enough, she finds out that she couldn't have even if she had tried.

The only other people that know her "panic attacks" are actually predictions are Emma and Nash. But it turns out she doesn't know nearly as much about Nash as she thought she did and that Nash knows way more about her than even she does herself.

It's Nash that delivers the startling news to Kaylee... that she's not quite human. In fact, she's something entirely different -- a bean sidhe. I don't want to give too much away by saying what exactly a bean sidhe is or does, but I can say that it eases Kaylee's guilt (slightly) knowing there wasn't really anything she could have done to stop the girl's death -- or the deaths of the two other girls only a couple days later, all one day apart and in the same way. Kaylee, with her new knowledge of just how things in the world of bean sidhes work, has a feeling something isn't quite right here. That maybe something is going on.

And when she meets Nash's "friend" Tod, her suspicions grow stronger with the information he shares with them -- well, mainly with Kaylee, since she's still a little unclear on how Tod's world works. Why is she still unclear, you ask? Well. Tod doesn't exactly fall into Kaylee's category. He's dead. Well, to be more specific, he's a reaper.


"The very idea of Death knowing my name made my skin crawl.
Even if this particular Death was only one of many,
and almost too pretty to look at."

With what she learns from Nash and then from Tod, Kaylee pulls together a theory about what may be happening. And that's where the story truly begins -- but where my review comes to a close. I don't want to share too much considering once this book gets going -- it really gets going. And to tell more would be too spoilery, so I'm just going to say that I truly adored this book with its amazing characters, plot, and world-building. Rachel Vincent is insanely talented, and I can't wait to delve into the rest of this beautiful series.