Early Review: The Bodies We Wear by Jeyn Roberts 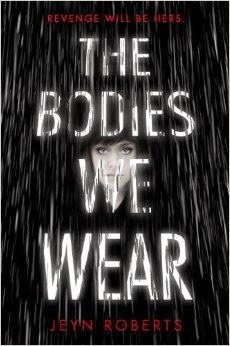 A streetwise girl trains to take on a gang of drug dealers and avenge her best friend’s death in this thriller for fans of Scott Westerfeld and Robin Wasserman.

People say when you take Heam, your body momentarily dies and you catch a glimpse of heaven. Faye was only eleven when dealers forced Heam on her and her best friend, Christian. But Faye didn’t glimpse heaven—she saw hell. And Christian died.

Now Faye spends her days hiding her secret from the kids at school, and her nights training to take revenge on the men who destroyed her life and murdered her best friend. But life never goes the way we think it will. When a mysterious young man named Chael appears, Faye's plan suddenly gets a lot more complicated. Chael seems to know everything about her, including her past. But too many secrets start tearing her world apart: trouble at school, with the police, and with the people she thought might be her friends. Even Gazer, her guardian, fears she's become too obsessed with vengeance. Love and death. Will Faye overcome her desires, or will her quest for revenge consume her?

In Jeyn Roberts’s somewhat futuristic new novel, there’s a highly addictive and dangerous drug terrorizing the streets.  That drug is called Heam, and it was created by two university students who eventually overdosed on their own product.  Heam is a hallucinatory drug that gives a glimpse of the afterlife to those brave/stupid enough to take it.  Once you take Heam, you’re an addict; and if you overdose… you’re scarred for life – literally and figuratively.  The scars you’ll bear will make you an automatic outcast – a social pariah.  And nobody knows that better than Faye.  When Faye was only eleven years old, she was forced to take Heam by a ruthless dealer and a group of his cronies as punishment for her father’s sins.  Faye overdosed, but the most frightening part was what she saw.  Those reports of a beautiful Heaven?  That was just a fairytale for Faye… she didn’t see any kind of Beulah land – she saw Hell.  Faye had a savior that night in a man named Gazer. He brought her back and saved her life… but there was nothing he could do for Christian, Faye’s best friend and the love of her very young life.  It was a tragic loss and a wound time would never heal.  Even with the love and support of Gazer, nothing can squelch Faye’s thirst for vengeance.  But when someone from her past makes an appearance, she begins to realize there’s more than one path she can take… if she’s strong enough to take it.

I’m a huge fan of Jeyn Roberts’s Dark Inside series, so I didn’t hesitate to grab up The Bodies We Wear.  However, if you go into this read expecting a similar tale to Dark Inside, you’re going to be disappointed.  This is a completely different kind of book, and it would be unfair to try to compare the two.  With an entirely different feel, The Bodies We Wear explores revenge and forgiveness and questions what happens when we reach the end of our lifeline.  The story won’t be for everyone, but I think there are readers that it will certainly appeal to.  The author notes in the beginning that she was going through a very deep and personal loss leading her to write this book.  It truly comes through in the pages and was extremely poignant. Faye’s thought pattern was intriguing, and her story was heartbreaking.  This may not be my favorite book by Ms. Roberts; but even though it didn’t captivate me as much as her other writings, it still held my attention and I liked it.  I adored Gazer, and I appreciated the ending as well as the decision made by the MC.  It is definitely something my own teen will enjoy, and I’ll be grabbing up a copy for her shelf.