Series Review: In the Company of Killers by J.A. Redmerski 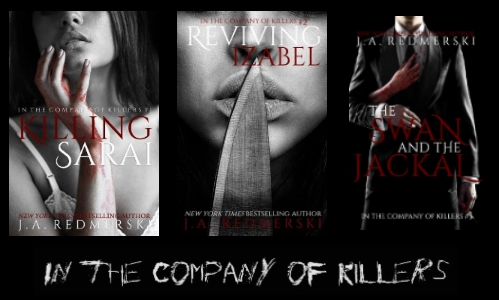 I enjoyed J.A. Redmerski’s Edge of Never series, and her book Song of the Fireflies has stayed with me since I read the last page.  When I saw Christy talking about the In the Company of Killers series, I thought… wait… how have I not read these yet? And so I did.  And those books blew my mind!!  It is a great talent when an author can write such intriguing yet incredibly different types of works.  I have to say this is my absolute favorite series of hers to date.   I look forward to reading all of her past and future work.

"Despite my growing fear, I still want to be right where I am,
trapped in the merciless arms of a killer."

Killing Sarai tells the story of a young girl growing up in a compound in Mexico where she has been held captive for the last nine years of her life by a ruthless drug lord.  The things she has seen and what she’s endured are shocking and horrific.  But Sarai won’t ever give up on the idea of escape and the freedom she craves.  When a merciless and intimidating assassin arrives at the compound on business, Sarai sees her chance… and takes it.

Goodbye, frying pan.  Hello, fire.  Sarai may be free from her captor, but she’s now at the mercy of her savior: an assassin whose young life rivals that of Sarai’s.  He’s cold, brutal, and forbidding – but the more they learn about one another, the closer they become.  Victor becomes her one chance at survival, and – even more surprising to him – he’s determined to keep her alive.

Oh. My. Stars.  What is this book I could not put down??!!!  It is so intense and absolutely thrilling.  Victor.  Victor, Victor, Victor… I love him.  He scares the stuffin’ outta me, but I love him.  He recognizes something in Sarai that she doesn’t even realize about herself.  The attraction that grows between the two of them is slow and powerful – it’s addictive.  Victor soon realizes that keeping Sarai alive will be his most difficult assignment yet.  If you think you know J.A. Redmerski’s writing… think again. An absolutely brilliant first installment to this electrifying series.

"I love to see her in white.  It makes her appear angelic to me.
An angel who carries death in her pocket."

Trying to live a life left behind years ago, Sarai struggles to find herself and forget the assassin who helped her escape her own personal nightmare and showed her a new and secret world.   She decides she can’t pretend to be that girl that disappeared all those years ago.  Not while there’s a score to settle.  There’s only one thing Sarai wants more than to be reunited with Victor… and that’s revenge.

This is a very different book from the first installment, with a change in pace and an entirely new feel… but it works.  I love the collaboration of various characters, the new levels reached in Sarai and Victor’s relationship, and the training that goes into reinventing herself and reviving Izabel.   I have to say one of my favorite components of the story is more insight into Fredrik.  I don’t want to say too much about him here since he is the star of the next book, but the anticipation that this sequel builds for the third installment is perfect.  A great and unique follow-up in the series!

"Though I learned the hard way that love is cruel and dangerous
and more fiendish than a man like me could ever be."

Oh, Fredrik.  My dear, dark, damaged Fredrik.  You might just be more broken and frightening than Victor.

Unlike Victor, Fredrik is not an assassin – he is a specialist.  His sadistic methods are unsurpassed in retrieving and uncovering all the secrets of those unfortunate enough to be questioned by him.  Getting to know Fredrik on a deeper level is bittersweet.  His childhood is absolutely gruesome and heart-wrenching. What molded him into the man he is today is, at times, difficult to read about.  The one bright light in his life was his love, Seraphina… but as we learned in the previous books, that did not end well.  Fredrik hasn’t given up finding her though; and while he continues to aid Victor and Izabel in their line of work, he has the biggest secret of all:  the woman locked away in his basement.  She’s the key to finding Seraphina, and he won’t give up until he does.

This book has some amazing twists and turns that I’m not going to even touch on because you need to discover that for yourself.  I loved seeing Victor and Izabel again and especially seeing the friendship between Izabel and Fredrik – it’s one of my favorite aspects and one of the most poignant moments in the story for me.  I hurt so much for Fredrik.  He has been through so much and he deserves happiness, but at the same time I wasn’t sure if Fredrik would know what do with happiness.  Yep, he’s that dark.  This story consumed me – it gave me hope, and it snatched it away.  I loved Fredrik, and I rooted for him and then railed at him.  Emotional rollercoaster, people!  I don’t want to reveal too much… but if you like your books with happy, hand-holding, riding-off-into-the-sunset, wrapped-in-a-giant-red-bow endings – this is not your book.  But it should be.  I loved it.  I don’t always want fluffy, melt-me-in-a-ray-of-sunshine conclusions. This book is dark, gritty, and perfect.  Just like Fredrik.

Posted by A Belle’s Tales at 3:56 PM
Email ThisBlogThis!Share to TwitterShare to FacebookShare to Pinterest
Labels: Book Reviews, In the Company of Killers, J.A. Redmerski, Series Review