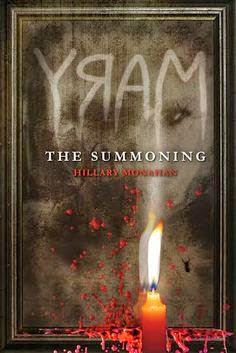 There is a right way and a wrong way to summon her.

Jess had done the research. Success requires precision: a dark room, a mirror, a candle, salt, and four teenage girls. Each of them--Jess, Shauna, Kitty, and Anna--must link hands, follow the rules . . . and never let go.

A thrilling fear spins around the room the first time Jess calls her name: "Bloody Mary. Bloody Mary. BLOODY MARY." A ripple of terror follows when a shadowy silhouette emerges through the fog, a specter trapped behind the mirror.

Once is not enough, though--at least not for Jess. Mary is called again. And again. But when their summoning circle is broken, Bloody Mary slips through the glass with a taste for revenge on her lips. As the girls struggle to escape Mary's wrath, loyalties are questioned, friendships are torn apart, and lives are forever altered.

A haunting trail of clues leads Shauna on a desperate search to uncover the legacy of Mary Worth. What she finds will change everything, but will it be enough to stop Mary--and Jess--before it's too late?

"It had been exciting until it turned terrifying..."

There was a time in my life, years ago, that I loved a good scary read.  I went through a major Stephen King and John Saul phase, and I’ve always been a Poe fan.  To this day, I still adore Dean Koontz and devour the Odd Thomas series.  But at this point in life I lean toward lighter reads, fluctuating from contemporary romance to fantasy and being satisfied with the thrill of dystopians.  I’ve always enjoyed urban legends – but there is one that I could never find the courage to read about or even watch. Supernatural even based an episode around it, and it remains the only one in nine seasons that I haven’t watched.  Yep, Bloody She-whose-name-shall-not-be-typed.  Now, to quote Michael Scott, I’m not superstitious… but I am a little stitious. I mean, why tempt fate?  No matter how many dares were cast at me when I was a kid, I never went into a dark bathroom and said THAT NAME.  Uh-uh.  No way.  So OF COURSE when I saw Mary: The Summoning, I ran the other way, right?  ’Cause that’s what rational people do when they’re afraid of something.  Well, put me on the crazy train and let me lick the windows all the way to Loony Land because I requested that book faster than you can blink. What better way to cure oneself of a paralyzing fear than to face it head on?  It said it was ages 12 and up.  I told myself: I’m way, WAY in the up… so it should be fine. Fine? Two weeks later, and I’m still sleeping with the light on and avoiding the mirror.  I. Am. Such. A. Weenie.  Even though I am easily terrorized by thoughts of HER, braver (reasonable) readers will have no such issues with this story.  So aside from the blinding fear and making sure there was no reflection on my Kindle while I read, I admit I enjoyed this book. The actual summoning was very interesting, and I was comforted to know that it wasn’t that easy to get “M” to make an appearance.  Unfortunately, I couldn’t connect with the teenage girls in the story.  Some of their antics and even mannerisms verged on annoyance – I was especially exasperated with one in particular, but I think that was the whole point.

I did love what Hillary Monahan did with the character Mary Worth!  I was very intrigued with the history revealed; and when her old letters to her sister were read, I was genuinely fascinated.  Now, I don’t know if this was creative license on the author’s part, or if this truly stems back to the legend.  I did no research – you can call it lazy, I call it self-preservation.  The vivid descriptions Ms. Monahan gives of “M” were exactly as grotesque and fearsome as they should be… and the beetles?! *SHUDDERS*


"'She's coming,' I whispered, my voice
drowned out by a series of earsplitting whines.
'She's here.'"

As frightening as ‘she’ was… once the letters were read, I found myself feeling bad for her and hoping that there was something from the past the girls could uncover that would put her to rest and grant her peace. Am I really that soft-hearted that I could feel sorry for a malevolent spirit?  No worries.  That dead crazy heifer did something so horrid my pity went straight out the window. I wanted this ghost b*tch gone. Do you want to know what she had the audacity to do??  Do you??  Then I guess you'll just to have to read it ;)

I know this: I must be a masochist because I have to have the next book.  I loved the ending, which wasn’t exactly a cliffhanger since one aspect of the story was wrapped up – but another… well that was just beginning.  The last words on the page were chilling to this scaredy-cat – but in a great way, as in the way that I know I won’t be forgetting what took place among the pages and that no refresher read will be needed before the next book releases.  No, really… not necessary!  I think this is a great read for teens who enjoy a little “scare” in their stories.  I offered to buy it for my teen who politely declined and asked me if I was crazy.  Well… clearly.

Posted by A Belle’s Tales at 1:03 AM
Email ThisBlogThis!Share to TwitterShare to FacebookShare to Pinterest
Labels: ARCs, Book Reviews