Review: Until We Fly (Beautifully Broken #4) by Courtney Cole 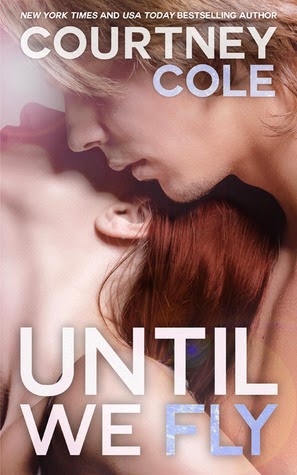 A good friend, a good soldier, a good everything. .
The problem is, good hasn’t gotten him anything but a crushed heart.

So after licking his wounds, he decides to move on. And moving on doesn’t include being good anymore.

Bad sounds so much better.

Jaded and detached, Brand is determined to never open himself up to anyone again. It’s not worth the pain. Instead, he becomes closed, hardened, aloof.

But then he’s called back home for a family emergency… a family that he is estranged from. A family that he put out of his mind a long time ago for very good reasons…reasons that involve secrets and pain. Reasons he tried hard to forget.

But home is where the heart is, and it just might be where Brand finds his again.

Why? Because home is where Nora Greene is. A fiery, red-headed spitfire, Nora is a thing from his past. A beautiful, feisty thing. When Brand left, she was away at boarding school.

But she’s back now.

And she wants Brand, scars and all.

Fans of the Beautifully Broken series have been longing for lovable ex-Army Ranger Branden Killien to have his own book, and Ms. Cole didn't disappoint us one bit. Brand was everything I'd dreamed he'd be and more. I've wanted Brand to have his happy ending ever since I met him in If You Leave and especially after what transpired in Before We Fall. A guy like Brand shouldn't have had his heart broken like he did.  He has his battle scars, but the most troubling ones are those that were left on his heart.  And even though he's been through hell and wrestles with a lot of doubt, will he see the possibility of a happily ever after with Nora Greene? And most importantly, does he have enough left in him to fight one more battle for Nora – and will she trust him enough to let him?

"She is tossed by the waves, but she does not sink."

I loved these two together!  Nora was a feisty, bossy thing; and she was a lot of fun to read about. But when her demons were revealed, it was crushing.  The one word I would use to describe Brand is strength.  He’s been a rock for everyone around him – a brave soldier, an amazing friend to Gabe, and a rescuer for Jacey. I couldn’t imagine Brand ever having a weakness, but realizing he does and finding out what that weakness was cut my heart.  If possible, I love him even more now.

"'Being brave doesn’t mean not being afraid…
it means being afraid and doing it anyway.'"

Courtney Cole always writes the most beautiful passages that work their way into my heart and make it impossible not to cry.  Until We Fly was no exception. This story was perfectly paced, and I was captivated from beginning to end.  I loved seeing Jacey and Gabe again, as well as other previous characters. This is a series that truly has something for everyone, and every reader will find a character that they can relate to and connect with.  Brand and Nora's stories are incredibly gut-wrenching but offer so much hope and inspiration. This is a series that insists on being read again and again.

"'…The best things in life are worth the greatest risk.
Sometimes, before we fall, we fly.'"

Posted by A Belle’s Tales at 1:45 AM
Email ThisBlogThis!Share to TwitterShare to FacebookShare to Pinterest
Labels: Beautifully Broken Series, Book Reviews, Courtney Cole