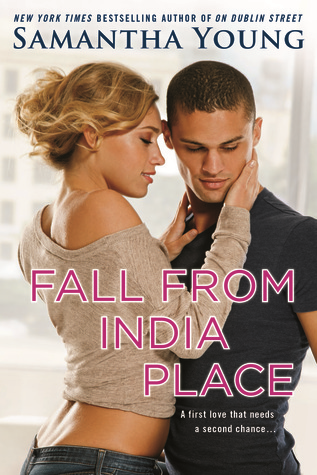 When Hannah Nichols last saw Marco D’Alessandro, five long years ago, he broke her heart. The bad boy with a hidden sweet side was the only guy Hannah ever loved—and the only man she’s ever been with. After one intense night of giving into temptation, Marco took off, leaving Scotland and Hannah behind. Shattered by the consequences of their night together, Hannah has never truly moved on.

Leaving Hannah was the biggest mistake of Marco’s life, something he has deeply regretted for years. So when fate reunites them, he refuses to let her go without a fight. Determined to make her his, Marco pursues Hannah, reminding her of all the reasons they’re meant to be together.…

But just when Marco thinks they’re committed to a future together, Hannah makes a discovery that unearths the secret pain she’s been hiding from him, a secret that could tear them apart before they have a real chance to start over again….

There’s nothing like getting lost in Samantha Young’s Dublin Street series and being transported to Scotland and surrounded by her wonderful characters.  I love re-visiting the characters I’ve fallen so in love with (why, hello, Mr. Carmichael), and l’m always excited to see what the author has in store for characters we’ve only glimpsed in previous books.

In this installment, our little Hannah is all grown up; and we finally get the scoop on what transpired between her and the mysterious Marco five years ago.  I always found Hannah to be an endearing teen – smart as a whip, nose always buried in a book.  I loved getting to know Hannah as a brilliant young woman, and the path she’s chosen in life absolutely thrilled me.  She touches the lives of so many and deserves nothing but happiness.  But Hannah is harboring a tragic secret – one that I found particularly gut-wrenching – and it’s caused her to put up a lot of walls around her battered heart.   Hannah constantly reminds herself she's doing well, she's strong and independent – she focuses on her work, her friends and family… just as long as anyone doesn’t try to get to close.  The past can stay buried, and Hannah can live her life.  Only the past has a way of rearing its ugly head at the most inconvenient times; and when that past, otherwise known as Marco D’Alessandro, shows back up in her life unexpectedly, it throws Hannah into a whirlwind of painful memories and triggers a deep-rooted, overwhelming ache she thought she’d put to rest years ago.

“The fragments of the past can become restless ghosts,
relentless in their haunting, unless you decide to
take a stand against them to exorcise them.”

This story played with my emotions in a massive way.   I loved seeing my favorite past characters so happy and full of life, seeing their families and enjoying their banter – seriously, I won’t ever look at green peas again without mentally addressing them a certain way – but I was devastated for Hannah.  I wanted to love Marco right away, but I had Hannah’s back on this one.   They both had a lot of communicating to do and feelings to sort out, but I honestly questioned how a relationship with the two of them was ever going to work.  Could Hannah ever forgive Marco for what he did?  A mistake that Marco regrets more than anything in his life and one he’s determined to atone for?  The truth is supposed to set you free, but these truths may destroy whatever hope there was for a reconciliation.

Ms. Young pulls out all the stops with Fall from India Place – I read it in one sitting and could not put it down, nor have I been able to stop thinking about this book and its characters since I finished their story.  There was a moment in this book that absolutely broke me, and it wasn’t even in regards to the tumultuous relationship between the main characters, yet it had a profound impact on them.  That’s one of my favorite aspects about this author’s work – she gives you so much to love and evokes so many feelings with her stories. A must for fans of the series and for any reader who longs to get lost in the pages of a book that touches your heart and fills you with emotion.  I can hardly wait for Cole’s story, Echoes of Scotland Street, which releases February 2015.

“When I’m with you it feels like everything’s going to be okay.”


I received a copy of this book in exchange for my honest review.

Posted by A Belle’s Tales at 1:58 AM
Email ThisBlogThis!Share to TwitterShare to FacebookShare to Pinterest
Labels: ARCs, Book Reviews, Dublin Street, Samantha Young