Early Review: The Truth About Alice by Jennifer Mathieu 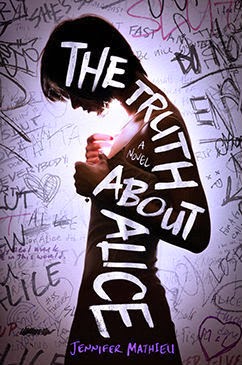 Everyone has a lot to say about Alice Franklin, and it’s stopped mattering whether it’s true. The rumors started at a party when Alice supposedly had sex with two guys in one night. When school starts everyone almost forgets about Alice until one of those guys, super-popular Brandon, dies in a car wreck that was allegedly all Alice’s fault. Now the only friend she has is a boy who may be the only other person who knows the truth, but is too afraid to admit it. Told from the perspectives of popular girl Elaine, football star Josh, former outcast Kelsie, and shy genius Kurt, we see how everyone has a motive to bring – and keep – Alice down.

"...there is one thing I've learned about people:  they don't get that mean and nasty overnight.  It's not human nature.  If you give people enough time, eventually they'll do the most heartbreaking stuff in the world."

Alice Franklin’s life is completely altered after one high school party.  She goes from a fun popular girl to one who seems to cave in on herself entirely.  Gone are the stylish and flirty outfits, now replaced with an oversized hoodie that she hides in.  Everyone’s talking about that night and how awful Alice is – and not just the kids at school, but their parents – and even her teachers.  Everyone knows that the star football player is dead because of Alice and what happened between them at that party. And you can always believe what everyone else says.  Because small-town gossip is gospel, and nobody would ever tell something that wasn’t the God’s honest truth.  Right?

The Truth about Alice is told from several different perspectives, and I found it to be enormously addictive while at the same time reminding me that high school is in fact the seventh circle of hell and most of its occupants the devil’s handmaidens.  As I began to read the wildly varying accounts of what happened to Alice, my heart broke for her.  I don’t want to give anything away, so I’ll just say that this book is an absolute must for teens.  It accurately demonstrates the consequences of gossiping, lying, and bullying.   There is a good message here, and my hope is that young girls reading the story learn or continue to place a higher value on friendship and sisterhood than on boys and popularity rankings.

This book proves that while not all relationships are worth saving, sometimes you can find the most worthy friendships in the most unexpected people.

I am very impressed with Jennifer Mathieu’s debut novel – I can’t wait for more from this promising and talented author!

Posted by A Belle’s Tales at 12:28 AM
Email ThisBlogThis!Share to TwitterShare to FacebookShare to Pinterest
Labels: ARCs, Book Reviews