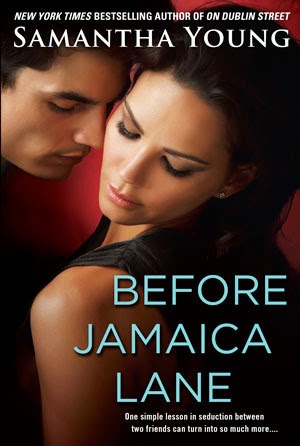 Despite her outgoing demeanor, Olivia is painfully insecure around the opposite sex—usually, she can’t get up the nerve to approach guys she’s interested in. But moving to Edinburgh has given her a new start, and, after she develops a crush on a sexy postgrad, she decides it’s time to push past her fears and go after what she wants.

Nate Sawyer is a gorgeous player who never commits, but to his close friends, he’s as loyal as they come. So when Olivia turns to him with her relationship woes, he offers to instruct her in the art of flirting and to help her become more sexually confident.

The friendly education in seduction soon grows into an intense and hot romance. But then Nate’s past and commitment issues rear their ugly heads, and Olivia is left broken-hearted. When Nate realizes he’s made the biggest mistake of his life, he will have to work harder than he ever has before to entice his best friend into falling back in love with him—or he may lose her forever…

Fans of this series became acquainted with Olivia Holloway in Jo and Cam’s story, Down London Road.  I knew right away that I wanted to get to know this feisty yet sweet librarian, and learning more about her made me love her immensely.  This is exactly the kind of character I know I could be friends with in real life.

Nate Sawyer is one of Cam’s best mates and he quickly and easily becomes friends with Olivia. He’s smart and handsome, but he’s a womanizer.  Normally that would put me off, but the reasons behind his slut puppy antics made me sit up and take notice while forgiving his love-‘em-and-leave-‘em ways.  Not to mention he is absolutely HILARIOUS:


“‘Nate, your commitment phobia is showing again.’
He turned to me in mock horror.  ‘Where?’
He patted his cheek anxiously.  ‘Get it off me.’”

When Olivia puts herself in Nate’s hands (literally and figuratively) so that he can show her the ropes in pulling off the perfect seduction, you think you know exactly where this is heading.  And while you may be right on some accounts, I don’t think anyone could predict what secrets Nate has been hiding and just how afraid he is of being hurt.


“Unhappy and bittersweet endings have a tendency to stay with you,
affect you long after you’ve finished the story.”

I just adore these two characters!  Liv is smart and funny and has such a big heart.  I hurt for her and her self-esteem issues, and I was absolutely gut-wrenched for the pain she and Nate experienced.  I wanted to dive straight into my Kindle with hugs for them both.


“I believed in all the things written within me,
I’d just somehow along the way stopped believing in my book jacket.”

I didn’t just want it to work out for Nate and Liv – I NEEDED it to.  Simply put, these two belong together.  Something their friends know, and something the reader knows. The question is… will they ever figure it out?  My lips are sealed.  ;)

Samantha Young has brilliantly created a series full of characters that this reader will never tire of.  I lose myself in their stories and their heartache and long for the happily-ever-afters that she flawlessly delivers. Ms. Young is pure genius in the way that she weaves previous characters we’ve grown to love into her books, and I was truly impressed with how this novel intertwined with the novella Castle Hill (which, if you’re a Braden and Joss fan – and you know you are – you will want to read first so as to not be spoiled by what transpires between those two).

Olivia and Nate’s story has one major thing in common with the previous On Dublin Street stories – it’s absolutely mesmerizing. This author is on my auto-buy list, and this installment of the series only cements those feelings. I can hardly wait for the next book, Fall from India Place, which releases June 3, 2014.


“‘No one has ever made me feel like the person I’ve always wanted to be until you.  You make me feel beautiful… All the way through.
No one else has ever given me that.  No one.’”
My Rating:

Posted by A Belle’s Tales at 1:58 AM
Email ThisBlogThis!Share to TwitterShare to FacebookShare to Pinterest
Labels: Book Reviews, On Dublin Street, Samantha Young