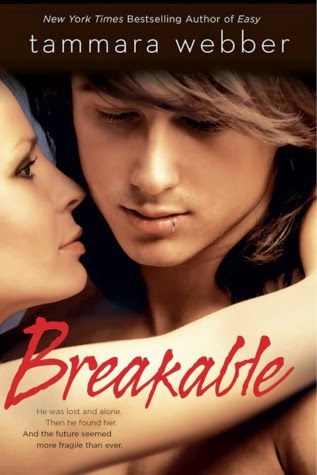 He was lost and alone. Then he found her.
And the future seemed more fragile than ever.

As a child, Landon Lucas Maxfield believed his life was perfect and looked forward to a future filled with promise — until tragedy tore his family apart and made him doubt everything he ever believed.

All he wanted was to leave the past behind. When he met Jacqueline Wallace, his desire to be everything she needed came so easy…


As easy as it could be for a man who learned that the soul is breakable and that everything you hoped for could be ripped away in a heartbeat.

As readers, we all crave a story that holds us completely captive with characters that touch our hearts so greatly we know they’ll be part of us always.  Tammara Webber did just that with her novel Easy.  While Easy was a perfect story with an amazing conclusion, I fell so hard for Lucas and Jacqueline that I still wanted more.  Not just a continuation of their story, but also a deeper understanding of these characters’ lives and especially a closer look into the life of Landon.  Breakable met those needs and even managed to surpass my expectations.  When I finished reading this beautiful story in the wee hours of the morning, I knew without a doubt that the pages of this book and the people that lived within were what I would be seeing when I closed my eyes.


“Her fingers stroked metrically across the side of her leg
– one-two-three, one-two-three –
and I imagined that if I was the one sitting next to her,
I’d open my palm and let her trace the music she heard onto my skin.”

It’s hard to tell you what transpires in Breakable without spoiling any of Easy, but I will share what I can.  This book simultaneously broke my heart and put it back together again more than a few times.  Lucas is the kind of amazing character who can’t see his own worth.  What took place in his past scarred him so deeply that it marred his vision of who he truly is.  Looking into his past was difficult at times, but it just made him even more special than I already knew he was.


“‘Your scars are battle wounds, but you don’t see them that way. Yet.’
… ‘This ink will make your skin yours again.
Maybe someday, you’ll see that your skin isn’t you.
It’s just what houses you while you’re here.’”

In Easy, Lucas is a savior; and my favorite part of the story is the girl who saves him back. In Breakable, we realize just how much she saved him and the demons she saved him from. I absolutely loved learning more about characters that were either only mentioned in Easy because that story was Jacqueline’s or who we had yet to be introduced to because Jacqueline had not yet experienced her own introduction.  Seeing through Lucas’s eyes was incredibly revealing, and I fell so in love with several of the people in his life.  His grandfather and Charles Heller tie for first, but they are closely followed by Boyce and Joseph.   Getting to know Rose was a gift – I already thought she was incredible, but now I know just how incredible.  Parts will, however, make you feel a particular loss even harder than you did in Easy.


“I knew the truth. He fell for all those things, and when she died,
it was like someone had extinguished the sun,
and he had nothing left to orbit.”

The way the befores and afters of this novel are told is absolutely brilliant.  This is not the same book as Easy only from the male perspective – it is so much more.  I loved learning what was going through Lucas’s mind when he met and fell for Jacqueline, but I loved learning what made Lucas Lucas even more.  Landon’s story is absolutely mesmerizing.   Trying to move on from this book is proving to be very difficult – it is a book hangover at its best – but I know I won’t wait long before re-reading it and reuniting with these characters.

Easy and Breakable are not to be missed; and I highly recommend this duology to fans of the new adult genre and lovers of beautiful writing and phenomenal heart-warming characters.  Breakable is an inspirational story of forgiving others as well as yourself and learning to trust someone enough to let them in.


“Except for taking notes, her hands were still.
She was like an enchanted being who’d suddenly
found herself earth-bound and bereft of her magical powers,
when nothing could be further from the truth.
She’d conjured love in the heart of a man
whose soul had been frozen for years,
anesthetized by too much pain and guilt to bear.”

Posted by A Belle’s Tales at 1:19 AM
Email ThisBlogThis!Share to TwitterShare to FacebookShare to Pinterest
Labels: ARCs, Book Reviews, Contours of the Heart, Favorites, Lucas Maxfield, Tammara Webber