Release Day Review: How I Got Skinny, Famous, And Fell Madly in Love by Ken Baker 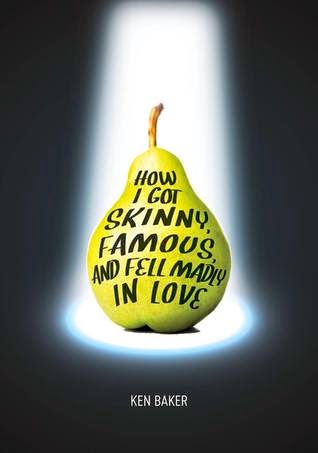 "Thick. Heavy. Big boned. Plump. Full figured. Chunky. Womanly. Large. Curvy. Plus-size. Hefty." To sixteen-year-old Emery Jackson, these are all just euphemisms for the big "F" word—"fat." Living on a Southern California beach with her workout fiend dad, underwear model sister, and former model mother, it is impossible for Emery not to be aware of her weight.

Emery is okay with how things are. That is, until her "momager" signs her up for Fifty Pounds to Freedom, a reality show in which Emery will have to lose fifty pounds in fifty days in order to win the million dollars that will solve her family's financial woes. Emery is skeptical of the process, but when the pounds start to come off and the ratings skyrocket, she finds it hard to resist the adoration of her new figure and the world of fame. Emery knows that things have changed. But is it for the better?

Emery Jackson is a relatively happy sixteen-year-old girl living in Southern California. Emery wouldn't mind losing a few pounds, but it's not a top priority. Especially since it doesn’t bother her nearly as much as it seems to bother her family. Emery lives with three health nuts who make her feel less than stellar about herself. Emery is constantly under fire for her weight and appearance from none other than her own mother. Emery's mother is, for lack of a better word, awful. She's age-, image-, and size-obsessed. She belittles Emery on a regular basis. Not to mention she's a total ditz who's mentally stuck in her teens. But luckily, Emery has Ben. When her overbearing family becomes a bit too much, her boyfriend is there to remind her that she is beautiful no matter what size she is. That's a message that I feel really did not come across too clearly in this book. In Emery's race to lose fifty pounds in fifty days, an obviously unsafe and nearly impossible feat, she resorted to starving herself, taking pills, and drinking laxative tea -- all just to ensure that her family would win a million dollars and that she would reach her goal. It's great to have goals, but not to that extent. And along with Emery’s unhealthy mindset, another thing that bothered me was the people encouraging her to keep going and pushing her further and further every day.

Another thing that I couldn't get on board with -- "skinny." That word was used in this book way too much for my liking. It's even in the title. "Skinny" does not equal beautiful. Society has warped girls' minds so that they think that to be accepted and loved, they have to be thin. That is completely untrue. Beauty truly does come from within; and what's on the outside will change, but the person you are at heart never will. Emery didn't quite get that until the very end of the book – and I won’t give away whether or not she reaches her goal, but I can say that she finally realizes being healthy is more important than being "skinny."

When I first started this book, I wasn't sure if it was for me. It was a struggle reading from Emery's point of view because I felt like the author didn't have a very firm grasp on what really goes through a teenage girl's mind. It felt very stereotypical and forced in some parts. That being said, there were a few funny moments and even a sentimental scene between Emery and her sister; but not long after, we were right back to the book’s nauseating bad habits that I was so turned off by to begin with. This was a case in which the bad outweighed the good. I can see what the message of the book was intended to be, and a lot could have been done with it because it’s a great message; but in my opinion, the delivery was all wrong. I also feel I should mention that there were a few mature parts and expletives in this book that make it best suited for readers 15 and up.

All in all, How I Got Skinny, Famous, and Fell Madly in Love was an okay story, but I don't see myself revisiting it or recommending it to a friend.

Posted by A Belle’s Tales at 1:00 AM
Email ThisBlogThis!Share to TwitterShare to FacebookShare to Pinterest
Labels: ARCs, Katertot reviews, Mckenzie Kate reviews