Early Review: The Here and Now by Ann Brashares 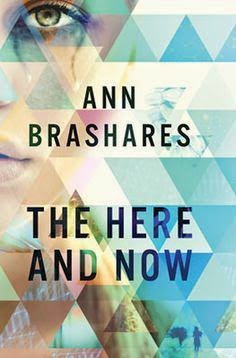 An unforgettable epic romantic thriller about a girl from the future who might be able to save the world . . . if she lets go of the one thing she’s found to hold on to.

Follow the rules. Remember what happened. Never fall in love.

This is the story of seventeen-year-old Prenna James, who immigrated to New York when she was twelve. Except Prenna didn’t come from a different country. She came from a different time—a future where a mosquito-borne illness has mutated into a pandemic, killing millions and leaving the world in ruins.

Prenna and the others who escaped to the present day must follow a strict set of rules: never reveal where they’re from, never interfere with history, and never, ever be intimate with anyone outside their community. Prenna does as she’s told, believing she can help prevent the plague that will one day ravage the earth.

But everything changes when Prenna falls for Ethan Jarves.

From Ann Brashares, the #1 New York Times bestselling author of The Sisterhood of the Traveling Pants series, The Here and Now is thrilling, exhilarating, haunting, and heartbreaking—and a must-read novel of the year.

"Follow the rules. Remember what happened. Never fall in love."

Ethan Jarves is enjoying a lazy day at the river. He baits his hook, casts his line, and relishes in the stillness of the water when he notices the air rippling over the stream in one particular area.  Upon further investigation, things transpire that leave him believing he must have been dreaming. Except for one important fact.  The bizarre and inexplicable occurrence also produced… a girl.  She was beautiful; but she was wet, cold and shivering, and… erm… naked.  Ethan couldn’t imagine where she’d come from or what she’d been through.  After she refused his help, he did the only thing he could -- he offered his hoodie and watched her walk out of his life.  But he never gave up hope he would one day see her again.  And he did. Two and a half years after that curious day at the lake and their first meeting… she walked right back into his life and sat one seat behind him in his pre-calculus class.
Prenna James tries hard to blend in with the others.  Learning from TV – episodes of Friends, in particular – on how to speak in a way that assures she fits in and won’t draw too much attention.  And Prenna knows the twelve rules.  How could she not since they’re drilled into her brain constantly?  She knows them by heart – especially the twelfth rule.  The rule that, when scary Mrs. Crew reads it, Prenna can’t help but feel is meant just for her:

12.  WE MUST NEVER, UNDER ANY CIRCUMSTANCES, DEVELOP A PHYSICALLY OR EMOTIONALLY INTIMATE RELATIONSHIP WITH ANY PERSON OUTSIDE THE COMMUNITY.

And that’s the rule she must never forget – even though there is one boy who invades her thoughts more than she cares to admit.  The boy from pre-calculus, her only real friend outside the community: Ethan.  And unbeknownst to her, he's the boy who gave her the mysterious hoodie she’s had in her possession since she arrived here.  The hoodie she hides in the depths of her closet.  But there are some things Prenna just can’t leave alone.  What if everything she’s been told isn't entirely true?  And what if all the rules and safety precautions they follow aren’t meant to help her?  What if they’re there to control her?

When Prenna makes some astonishing discoveries and truths are revealed, she has no choice but to run. Fortunately for her, Ethan won’t let her run alone.  It’s a race against the clock to stop one moment in time before the world as we know it becomes the world that Prenna and her fellow travelers escaped from.  Can they solve the mystery before them, and will they make it before it’s too late?

I haven’t read many books on time travel, but I’ve really enjoyed those I have.  This was also my first book by Ann Brashares (I know… I can’t believe I haven’t read The Sisterhood of the Traveling Pants series yet, either) so I was able to go into this story with a completely open mind and no specific expectations.  For me, this book wasn’t so much about the actual time traveling as it was about those who had traveled and their reasons why. Still, this book worked for me, and I enjoyed it.  Prenna is an interesting character, and Ethan is incredibly sweet.  There were some exciting moments; and although I would have liked for some things to be explored a bit more, this book held my attention and I liked it.   I’d love to see a continuation of this story because while there was some closure, it wasn’t all that I had hoped for.

While this book may not appeal to hardcore fans of time travel, The Here and Now is a story of the most forbidden kind of love that you can’t help but root for.