Review: Hard As It Gets (Hard Ink #1) by Laura Kaye 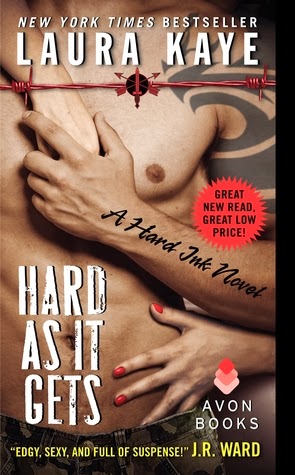 Trouble just walked into Nicholas Rixey's tattoo parlor. Becca Merritt is warm, sexy, wholesome--pure temptation to a very jaded Nick. He's left his military life behind to become co-owner of Hard Ink Tattoo, but Becca is his ex-commander's daughter. Loyalty won't let him turn her away. Lust has plenty to do with it too.

With her brother presumed kidnapped, Becca needs Nick. She just wasn't expecting to want him so much.
As their investigation turns into all-out war with an organized crime ring, only Nick can protect her. And only Becca can heal the scars no one else sees.

Desire is the easy part. Love is as hard as it gets. Good thing Nick is always up for a challenge...

I love my fellow book bloggers; and I am especially grateful to those whose tastes in books mirror my own, keeping my TBR well padded.  One such blogger is Kimba from The Caffeinated Book Reviewer.  She feeds my Kindle quite often; and when I read her amazing review of this book, I one-clicked this story right into my hands.

Now before we go any further, let's get this out of the way so we can all focus:
THAT COVER.  Holy steamy goodness.  It is so very pretty... and that title and synopsis?  *fans self*  If that doesn't light your fire... your wood's wet.  Okay, onto the review:

“He smelled of leather and mint and tasted like sin.”

After a horrible ambush in Afghanistan, five former Special Forces soldiers were stripped of their honor, discharged, and discredited in spite of the courageous service they performed for their country.  When Becca, the daughter of the man responsible for this injustice, shows up at the Hard Ink tattoo parlor years later looking for Nick Rixby, second in command of their team, and requesting his help, he immediately turns her away.  No way is he helping the daughter of the man who betrayed them all.  But he soon realizes Becca, who has no idea what her father did, is in serious trouble herself; and he knows he can’t hold her responsible.  Maybe by helping Becca, he can uncover the truth about the man he once looked up to who let him and his fellow soldiers down.  Even if it means contacting the guys – each of them harboring his own bitterness. Will they still be the synchronized team they once were, or have those bridges been burned for good?  Can they pull together and help Becca save her brother’s life?  Most importantly, can Nick let himself feel what he’s feeling for Becca while holding onto the grudges he has against her father?

Hard As It Gets is a steamy, exciting, and fast-paced story that easily reels you in and keeps you engrossed to the final page.  Each character Laura Kaye created is addictive, and I’m really impressed with how well they are fleshed out.  I’d love for each of the guys to have his own story; and I can’t wait to start Hard As You Can, the next installment in the Hard Ink series, which will follow Shane – the charming and hilarious southern ex-soldier that comes to Nick and Becca’s aide. I’m seriously hoping Beckett will get a book because he is hands-down my favorite of the supporting characters – next to Eileen, that is ;)  I loved how things wrapped up in this book; and while there was no awful cliffhanger, there are still answers to be found and wrongs that need to be righted as the series continues.  I look forward to seeing how that will all unfold.

My first Laura Kaye novel but certainly not my last, Hard As It Gets is a story about uncovering the truth, discovering love, and finding a family you thought was lost forever.

“God, this kiss. It was the kind she'd remember forever,
that would invade her dreams and haunt her in quiet moments.
The kind her older self could look back on and know, once, she'd really lived.
The kind that, no matter what, she could never, ever regret.”

There will be five books in this series with Hard to Hold on To, book #2.5 (Easy's story), releasing in August, followed by Hard to Come By (Marz's book) in November. *happy dance*