Review: The Dead-Tossed Waves (The Forest of Hands and Teeth #2) by Carrie Ryan 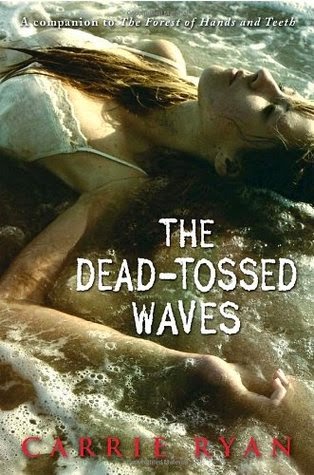 Gabry lives a quiet life. As safe a life as is possible in a town trapped between a forest and the ocean, in a world teeming with the dead, who constantly hunger for those still living. She's content on her side of the Barrier, happy to let her friends dream of the Dark City up the coast while she watches from the top of her lighthouse. But there are threats the Barrier cannot hold back. Threats like the secrets Gabry's mother thought she left behind when she escaped from the Sisterhood and the Forest of Hands and Teeth. Like the cult of religious zealots who worship the dead. Like the stranger from the forest who seems to know Gabry. And suddenly, everything is changing. One reckless moment, and half of Gabry's generation is dead, the other half imprisoned. Now Gabry only knows one thing: she must face the forest of her mother's past in order to save herself and the one she loves.

“That’s what I’ve started to learn about this world.
It might give, but it always takes away.”

This was another gripping installment of the Forest of Hands and Teeth series, but this story has a completely different feel from book one.  I mentioned in my review of The Forest of Hands and Teeth that I was disappointed this sequel wouldn’t be from Mary’s POV, but I loved finding out just how intricately woven the two stories were and that I would in fact receive answers to the questions I was left with in book one after all.

The Dead-Tossed Waves didn’t surpass my love of its predecessor, but it was a very intriguing read nonetheless.  Gabry is very different from Mary, and she seems so much younger with a lot of lessons still to be learned.  In all fairness, she grew up much differently from Mary; and that really influenced her thoughts and actions.  I didn’t care for her as much as I did Mary, but she grew on me as the story unraveled; and I felt for her over what transpired.

Catcher was a character who kept me on the fence, which is always fun – not knowing exactly what he was capable of and whether he would win me over or not.  Elias, on the other hand, drew me in easily – I was intrigued from the beginning.  He held all kinds of secrets – secrets that would impact Gabry immensely.

I wasn’t quite as alarmed reading this book as I was reading The Forest of Hands and Teeth, but that’s not to say it didn’t have its scary moments.  The Unconsecrated – or Mudo, as they are called in this sequel – are still a huge threat, and you’re never unaware of their dreadful presence.

All in all, The Dead-Tossed Waves was a great follow-up and really builds the path to the next book, The Dark and Hollow Places, which I’ve finished and really enjoyed. I’ll go ahead and share that it COMPLETELY changed my mind about two of the main characters, and I ended up caring deeply for one that I never thought I would.  A rousing and captivating series.

“‘Sometimes it’s those things you can’t touch
that you need to hold on to the most.’”

Posted by A Belle’s Tales at 1:49 AM
Email ThisBlogThis!Share to TwitterShare to FacebookShare to Pinterest
Labels: Book Reviews, Carrie Ryan, The Forest of Hands and Teeth, zombies