Review: If You Leave (Beautifully Broken #2) by Courtney Cole 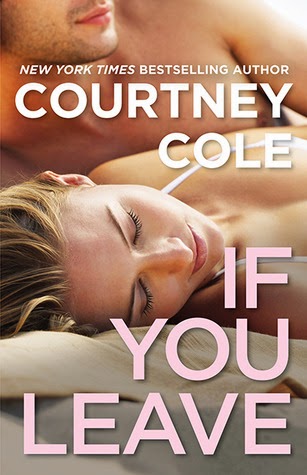 26-year old Gabriel Vincent is a badass hero. Or he used to be, anyway. As an ex-Army Ranger, Gabe never thought he needed anyone. But after one horrible night in Afghanistan scars him in a way that he can't get past, he needs someone who can help him heal...even if he doesn't realize it.

25-year old Madison Hill doesn't need anybody...or so she thinks. She grew up watching her parents' messed-up abusive relationship and she knows there's no way in hell that she's ever letting that happen to her.

They don't know it in the beginning, but Gabriel and Madison will soon develop a weakness: Each other.

But Gabriel's got a secret, a hidden monster that he's afraid Maddy could never overcome... And Maddy's got issues that she's afraid Gabe will never understand. They quickly realize that they need each other to be whole, but at the same time they know that they've got demons to fight.

And the problem with demons is that they never die quietly.

“The world breaks everyone, and afterward,
some are strong at the broken places.”
- Ernest Hemingway

If You Leave is exactly the kind of amazing story one expects from Courtney Cole; but aside from the beautiful writing and engaging characters she is known for, she gives us a very unique subject matter in a reading world being dominated by the New Adult genre.  This story grabs you from the first page by opening with a scene readers would never expect – Army Ranger Gabriel Vincent awakens in Afghanistan to the whimpers of a young girl; and as he clears the sleep from his eyes, he discovers with a devastating realization the person responsible for her cries… him.

“‘It is different for everyone, but it chases us all.
The bad thing caught you.’”

From Gabe and Madison’s first steamy encounter to sharing a terrifying and traumatic incident, this couple’s story is absolutely hypnotizing.

The things Gabe has witnessed and the overwhelming guilt he carries over what transpired in Afghanistan is too much for one man to bear.  Even a man as tough as Gabriel Vincent.  It’s been a while since my heart has hurt as much for a character as it did for Gabe.  But as much as I cared for him, I feared for Madison and the risks of her having a relationship with him.  Not because he suffered from PTSD… but because he had yet to seek treatment for it.  These characters are just so real.   I love that Ms. Cole stresses the importance of therapy and that not even Madison can make all the pain go away.  Gabe has to want it and work for it — and most importantly, to reach out and ask for help. The question is… will Gabe be strong enough to swallow his pride and ask?

“‘The good news is that fear is a choice.
You can stand in front of it, punch it in the face
and get on with life.’”

Madison is not without her own set of problems; and while I found her story sad, I found the character herself incredibly courageous.  I really like Maddy’s determination and grit.  She has a big heart; and when she cares for someone, she is a force to be reckoned with.

One of my favorite things about the characters in the Beautifully Broken series is how hard they have to work to earn the reader’s love.  The author doesn’t put them on a pedestal or build them to perfection.  She shows every shortcoming, every scar, and every wound. You feel every hurt and every hope they do as they struggle to overcome the demons they live with.  Though they aren’t perfect, these characters are fighters – and they definitely earned my love.

“Life goes on. Whether it’s bad or good or otherwise, it goes on.
And there’s not anything we can do but make the best of it.”

The hard work and research that went into this book is evident (please don’t miss the statistics and the link that the author includes in her note at the end of the book). I know this story is going to bring much awareness not only to those who suffer from PTSD, but also to how dangerous fighting for this country really is. Those who serve our nation are truly heroes.  This is one of those books that I will never forget reading. Not ever.

“‘Even the strongest cry.’”