Review: Before We Fall (Beautifully Broken #3) by Courtney Cole 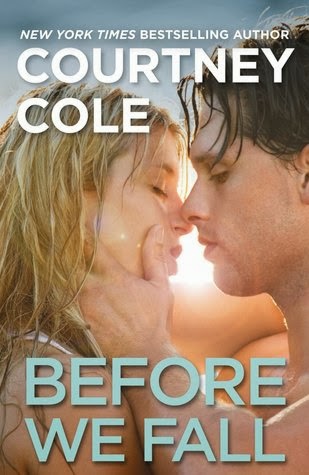 Sometimes, one dark moment is all it takes to turn your world black...

For 24-year old Dominic Kinkaide, that moment took place on the night of his high school graduation. One dark incident changed him forever. He's a hardened actor now, famous in the eyes of the world, but tortured in his own. He doesn't care about much of anything, except for losing himself in the roles that he plays.

23-year old Jacey Vincent doesn't realize how much her father's indifference has affected her. She is proof that sometimes it isn't one specific moment that wrecks a person, but rather it's an absence of moments. She's like a bird with a broken wing-strong yet fragile, as she tries to float through life, finding acceptance in the arms of random guys, one after the other... to fill the void that her father left in her.

Until she meets Dominic.

After jaded Dominic and strong-willed Jacey are thrown together, his secret and her issues create a dark and damaged energy that will soon turn their attraction to each other into an explosive storm.

Even though when the clouds have cleared and the dust has settled, both of them are almost obliterated... they've learned a priceless lesson.

Sometimes, before we fall... we fly.

Courtney Cole does it again with this third installment of the Beautifully Broken series.  I was on the fence about Jacey Vincent.  From what I had learned about her in If You Leave, I wasn’t sure she was my cup of tea.  Jacey turned out to be a very pleasant surprise.  She’s a sweetheart who made some really bad choices in her past, but she’s doing her best to get on the right track.  I’ve said before that Ms. Cole makes her characters work to earn the love of her readers, and no one has had to work as hard as Dominic Kinkaide.  His off-putting arrogance and jadedness had me uttering the phrase “douche canoe” more than once.  And he knows he’s one:

“‘I’m not a good guy, Jacey. I’m not the person that you’d like to believe. Please know that. Don’t make the mistake of romanticizing me.’”

I knew there would be underlying circumstances that made Dom build that stone fortress around his heart, but it was hard to believe he could ever be the man Jacey needed in her life.  I found myself pulling for best friend Brand for a while, but then slowly but surely I started seeing Dom in a different light.  Once the story behind this tortured soul unfolds, I couldn’t help rooting for him and wanting Jacey to be the one he’d finally confront his ghosts and demons for.

“You’re different from everyone I know. You’re a breath of fresh air, and I just want to keep breathing you in. That’s a big thing for me, you have no idea.”

He wasn’t the easiest person to forgive, but he turned out to be completely worth the risk.  No one deserves to carry around that much guilt and sadness in their hearts. And the saying “the ones who are the hardest to love are the ones who need love the most” has never been truer.

The supporting characters in this story were just as intriguing as the main stars, and I can’t wait to find out more about them in the upcoming novels.  I’m excited for Brand’s story, and I’d very much like to learn more about Dom’s brothers… namely Sin.  I’m really curious about his character, and with a name like Sin… you know he’s got to have one heck of a story.

Courtney Cole’s writing is as beautiful as always, giving me more quotes than I’d ever be allowed to use in a review.  She makes the unlovable lovable and heals the people who are the most broken.  I can never get enough of stories like that, and I will never be able to get enough of her work.