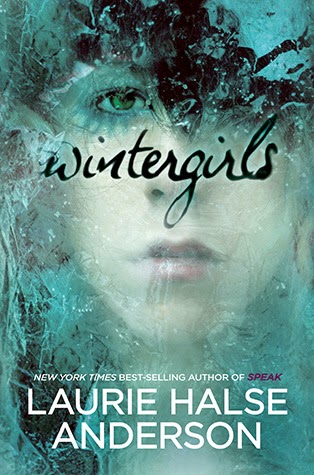 “Dead girl walking,” the boys say in the halls.
“Tell us your secret,” the girls whisper, one toilet to another.

I am that girl.
I am the space between my thighs, daylight shining through.
I am the bones they want, wired on a porcelain frame.

Lia and Cassie are best friends, wintergirls frozen in matchstick bodies, competitors in a deadly contest to see who can be the skinniest. But what comes after size zero and size double-zero? When Cassie succumbs to the demons within, Lia feels she is being haunted by her friend’s restless spirit.

In her most emotionally wrenching, lyrically written book since the multiple-award-winning Speak, Laurie Halse Anderson explores Lia’s descent into the powerful vortex of anorexia, and her painful path toward recovery.

“Do I want to die from the inside out or the outside in?”

I received a Kindle Daily Deal notification for Wintergirls; and though the subject matter was a very different kind of read for me, I grabbed it up immediately because I’ve been wanting to read Laurie Halse Anderson for a while now.  I am so glad I read this book.  Ms. Anderson’s writing is stunning, and I read this story in one sitting.

Lia and Cassie’s friendship has always had a competitive edge to it; but when they decide to contend for the title of who can be skinniest, things turn scary fast, ultimately ruining their relationship.  Lia is left feeling alone and heartbroken, with her quest for absolute thinness her only companion.  When Cassie’s inner demons become too much for her and she loses her battle, the affect it has on Lia is devastating.

“We swore sacred oaths to be strong and to save the planet
and to be friends forever.”

Wintergirls is a sad and very sobering look into the psyche of someone suffering with anorexia nervosa.  It is an emotional read, one that broke my heart not only for Lia but for her family who felt so powerless to help her.

“They yell at me because I can't see what they see.
Nobody can explain to me why my eyes work different than theirs.
Nobody can make it stop. ”

There is an extremely popular book written years ago that many anorexics have deemed their bible.  I won’t mention the title, but the character in that particular book comes across as very selfish and unlovable.  There’s a huge difference with Ms. Anderson’s story, as Lia is an extremely likable character who loves her family – especially her younger sister – and while she has a trying relationship with her mother, she really doesn’t want to displease anyone.  It was easy to feel compassion for her and those around her.

“I’m angry that I starved my brain and that I sat shivering in my bed at night
instead of dancing or reading poetry or eating ice cream or kissing a boy...”

As for my feelings about this story being a trigger for readers who have experience with this disease, I believe triggers can be found anywhere and in anything when battling this sickness.  I commend Ms. Anderson for writing such a moving story on this difficult and sensitive topic.  I’m definitely going to read more of her work, and I hope with all my heart that this book will reach someone in a positive way and help them with their struggle.