Review: What to Buy the Shadowhunter Who Has Everything (And Who You're Not Officially Dating Anyway) by Cassandra Clare and Sarah Rees Brennan 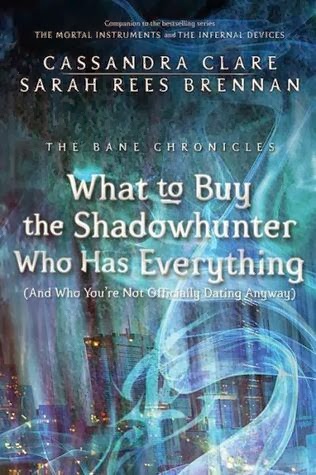 Title: What to Buy the Shadowhunter Who Has Everything (And Who You're Not Officially Dating Anyway)
(The Bane Chronicles #8)
Authors: Cassandra Clare,
Sarah Rees Brennan
Publisher: Margaret K McElderry
Published: November 19, 2013
Purchase:  Amazon  |  B&N

Magnus Bane may or may not be dating Alec Lightwood, but he definitely needs to find him the perfect birthday present.

Set in the time between City of Ashes and City of Glass, warlock Magnus Bane is determined to find the best birthday present possible for Alec Lightwood, the Shadowhunter he may or may not be dating. And he’s also got to deal with the demon he’s conjured up for a very irritating client...

“The heart had its reasons, and they were seldom all that reasonable.”

I haven’t read all of the Bane Chronicles yet, but this is hands-down my favorite so far.  Magnus is delightful as always, spouting sentences that had me laughing out loud; but it was Alec who truly stole my heart in this short story.  I grew to love Alec in the Mortal Instruments series; but I confess, it took some time – of course, now I absolutely adore him.


“He was conscientious, the kind of person who believed
that the others around him were so much more important than he was,
who already believed that he was letting everybody down.”

Seeing Alec through Magnus’s eyes not only cements my feelings for them both, but should carry a warning that loss of consciousness due to swooning could very well occur.


“Then Alec had smiled at one of Magnus’s jokes, and the smile had lit a lamp in his solemn face, making his blue eyes brilliant, and briefly taking Magnus’s breath away.”

I highly recommend this story to all who were disheartened by the events that took place at the end of City of Lost Souls.  Even though this book (set in between City of Ashes and City of Glass) takes place far before everything goes down in that latest installment, it gives you all the Malec feels and gives so much insight into Magnus and Alec’s sweet but at times tumultuous relationship.


“Yes, this one, this one fits,
after all the stumbling around and searching, and here it is.”

And as for the gift that Magnus chose for the Shadowhunter who has everything? It spoke volumes of how clearly Magnus saw him and was one I thought was absolute perfection.

I’m simply mad for Magnus Bane.  I cannot get enough of the High Warlock of Brooklyn – and yes, his colorful wardrobe and his fabulous, often theatrical soliloquies usually have me in stitches; but when Magnus hints at the heartache he has lived with for so many years as he reminisces over the loved ones he watched grow old and die while he remained ageless… my heart breaks for him, and I am reminded that being immortal is nothing to covet. Ragnor Fell, Raphael Santiago, the feisty Isabelle, and even the demon Elyaas all get honorable mentions for adding so much to this little book. A fast, at times funny, and most assuredly heartwarming short that fans of Cassandra Clare won’t want to miss!


“For a long wild euphoric moment Magnus believed that Alec did not want anything more than to be with him, that they would not be parted.  Not for a long, long time.”

Posted by A Belle’s Tales at 12:31 AM
Email ThisBlogThis!Share to TwitterShare to FacebookShare to Pinterest
Labels: Book Reviews, Cassandra Clare, Magnus Bane, Malec, shadowhunters, The Bane Chronicles, The Mortal Instruments