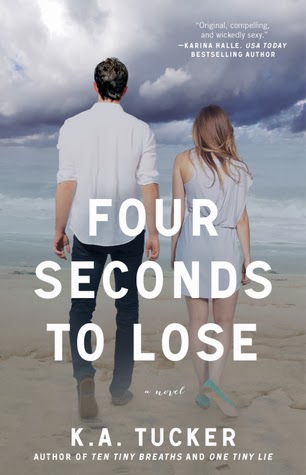 When a gorgeous young dancer walks through his door, a strip club owner must decide whether to follow his rules or his heart in the third novel by the author of One Tiny Lie and Ten Tiny Breaths.

Owning a strip club isn’t the fantasy most guys expect it to be. With long hours, a staff with enough issues to keep a psych ward in business, and the police regularly on his case, twenty-nine-year-old Cain is starting to second guess his unspoken mission to save the women he employs. And then blond, brown-eyed Charlie Rourke walks through his door, and things get really complicated. Cain abides by a strict “no sleeping with the staff” rule. But being around Charlie challenges Cain’s self-control…and it’s been a long time since any woman has done that.

Twenty-two-year-old Charlie Rourke needs a lot of money, really fast, in order to vanish before it’s too late. Taking her clothes off for men makes her stomach curl but Charlie tells herself that at least she’s putting her acting and dancing skills to good use. And though her fellow dancers seem eager to nab their sexy, sophisticated, and genuinely caring boss, she’s not interested. After all, Charlie Rourke doesn’t really exist—and the girl pretending to be her can't get distracted by romance.

Unfortunately, Charlie soon discovers that developing feelings for Cain is inevitable, and that those feelings may not be unrequited—but losing him when he finds out what she’s involved with will be more painful than any other sentence awaiting her.

“I believe some people are inherently evil.
I believe guilt is a powerful motivator.
I believe redemption is something you can strive for but never fully achieve.
I believe second chances exist only in dreams, never in reality.
I believe you don't have years, or months, or weeks to impact a person's life.
You have seconds.
Seconds to win them over, And seconds to lose them.”

I’ve been waiting for Cain’s story ever since we met him in Ten Tiny Breaths, the first installment of this absorbing series.  I always knew there was a lot more to this handsome club owner than met the eye and that he was sure to have a fascinating story to tell.  K.A. Tucker didn’t disappoint me one bit, but even better than finally getting a peek into the life of the illustrious and enigmatic Cain was a story that held me captive… and that story belongs to Charlie.  It was thrilling, dangerous, and so engrossing that I couldn’t put it down.  As a matter of fact… at the time of this review, I’ve read Four Seconds to Lose twice.  I enjoyed it that much.  Both of these characters have had hard lives full of hurt and heartache.  Cain has worked so hard to overcome his demons and not only pull his life together but also help those less fortunate and do his best to put them on a path to a brighter future.  Charlie, however, is still running from her past… and unfortunately, it’s about to catch up with her.  Will she and Cain find a happily ever after, or will the promise of what might have been completely unravel what’s left of their hearts when all their secrets are out in the open?

Undercover drug deals, secret identities, and an inside look into the world of strippers and clubs make this an exciting, edge-of-your-seat read!  My heart pounded with every dangerous situation these characters found themselves in.  Charlie’s story is a gut-wrenching one, and Cain’s past broke my heart.  I wanted these two to find their way to one another and finally have peace and solace in each other’s arms.  If ever two people deserved a happily ever after, it’s Cain and Charlie.  I wouldn’t dare spoil it for you by saying whether they get there or not… you’ll have to find out in this must-read book.


“For all that I hate about what I’ve done,
there’s one thing I can’t regret. It led me to him.”

As always, K.A. Tucker makes you fall more in love with not only the main characters but also the secondary characters you’ve already grown to care for.  The best cameos from the beloved group take place in this third novel, and I adored seeing them all together.  I’m so happy that there is going to be a fourth novel in June, Five Ways to Fall (Ben’s story), and that I can keep living in the world this talented author has created.


“She’s the woman who stole my heart right out from me
before I even realized she had her hands on it.”

A huge thank-you to the publisher for allowing me to read this story in exchange for my honest review.